Lady Vikes redeem themselves in 3-1 win over Spartans 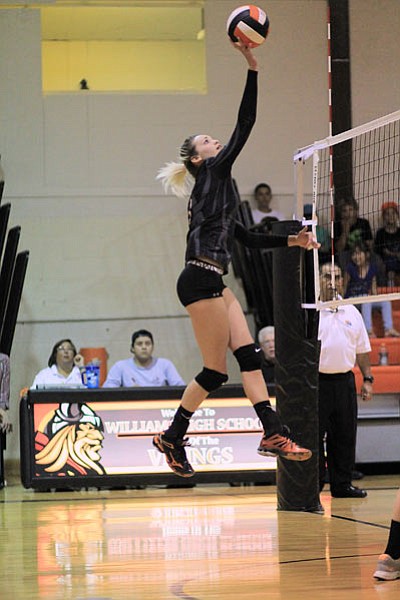 WILLIAMS, Ariz. - It was a big week for local volleyball action as the Ash Fork Spartans traveled to Williams to face the Lady Vikes Sept 29.

Grantham attributed a large crowd turnout to the success of the girls. Viking football players and player's family members cheered the girls on throughout the sets.

"That was nice to see, we don't usually get that turn out," Grantham said. "We needed that. Our girls really responded to that (the cheering). The more the community gets involved the better the girls play for sure."

The Vikings had not beat the Spartans in several years. The loss to the Spartans twice at the Ash Fork tournament Sept 11 and 12.

"I knew we could get the win," Grantham said.

The Vikings were led by outside junior hitter Kami Batterton who had 15 kills, 26 digs and one block.

"She had a key block for us in the last set," Grantham said.

"She didn't miss a serve for the whole game, every rotation," Grantham said. "That was very impressive."

"She actually got a block and recovered it which is hard to do," Grantham said about Koss.

"I really enjoy playing Ash Fork," Grantham said. "We play pass, set, kill. As you can see the volley is really good, it's a very exciting game."

Grantham said the girls had been training hard and played hard in the game. Although many of the players are friends, they view Ash Fork as a rival.

"Everybody was on their game, nobody had a bad game, no one had a bad attitude, we all played together," she said.

With the win, the Vikings broke their home losing streak and are now 1-3 at home. They face Telesis Prep Oct. 8 and Salome Oct. 10.