Flu season gets a head start in Williams 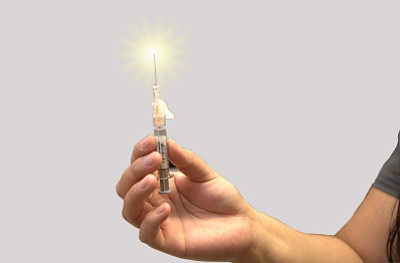 A nurse at North Country HealthCare’s Williams Clinic prepares to give a patient a flu vaccine Sept. 30. Ryan Williams/WGCN

WILLIAMS, Ariz. - With several cases of the flu reported in Coconino County, flu season is officially here. North Country HealthCare now has the 2015-2016 flu vaccine in hand and is urging everyone to get vaccinated.

"This is unusually early," said Nell Brown, North Country nurse manager, about the onset of flu season. "It used to be just in October. But now they're saying whenever the antigen comes out, get your flu shot."

Brown said it takes two weeks to build immunity to the flu and she recommends getting in as soon as possible before flu season ramps up.

According to the Center for Disease Control (CDC), the flu vaccine is recommended for ages 6 months on up. If it is a child's first flu vaccine, health providers give half a dose during the first visit and the second dose four weeks later.

"People over 65, people with heart problems, diabetes, asthma, they get hit the hardest," Brown said.

She said many people with asthma don't realize how important it is for them to get the vaccine. Brown said the medications and steroids that some asthmatics take compromise the immune system and make them susceptible to flu complications.

Brown is also concerned about parents withholding the vaccine from their children because of rumored safety concerns. Some parents believe that vaccinations cause autism and other developmental conditions although no sound research has been found to support this theory.

"They say they're getting enough immunizations as it is," Brown said. "I make my kids and grandkids get the flu shot. They stay healthy. They might get a little cold but they aren't out of school."

How effective is the flu vaccine?

Health officials may have more difficulty in convincing the public to get flu shots after the ineffectiveness of last season's flu shot. According to the CDC, the 2014-2015 vaccine was only 19 percent effective in protecting people from the flu, one of the lowest rates in the past decade. Typically the flu vaccine is 10-60 percent effective.

Flu viruses change constantly, they can change from one season to the next or they can even change within the course of one flu season. Because of these factors, there is always the possibility of a less than optimal match between circulating viruses and the viruses in the vaccine.

Every year scientists analyze how the current flu strains have spread and how the current vaccine responds to what's circulating. A group of experts including the CDC and the World Health Organization use the information to make recommendations about which viruses should be used in the newest vaccine.

According to the CDC, there are several benefits from getting the flu vaccine.

1. The flu vaccine can keep you from getting sick from the flu.

2. Being immunized can help family members from catching the flu.

3. Taking the flu vaccine can reduce symptoms of the flu if a person does get sick.

The CDC says there are a few risks with the flu vaccine:

1.There is a possibility of an allergic reaction.

2. Some people get swelling, achiness and redness following the shot.

3. There is a small possibility that influenza vaccine could be associated with Guillain-Barré syndrome.

There are several flu vaccine options for the 2015-2016 flu season.

The flu shot - The vaccine is usually injected into the upper arm. It is made from an inactive influenza virus. Adults and children ages six months and up can get the shot. Children getting the flu vaccine for the first time will need two shots, four weeks apart. It is not recommended for those with egg allergies. An alternative is available. There may be soreness in the arm and possibly a mild fever and achiness.

The nasal spray: The vaccine is delivered in a mist directly into the nose. Some side effects include runny nose, headache, sore throat and cough. Anyone between the ages of two and 49 can get the spray except for children or teens who take aspirin, children with weak immune systems, pregnant women or those with egg allergies. The CDC recommends the nasal spray for healthy children between two and eight years old.

Flu shots will be available at North Country HealthCare in Williams on Mondays and Thursdays throughout the month of October from 8:30 a.m. to 4 p.m. An appointment is recommended so people can be seen quickly and the nursing resources are available. Cost for the flu shots this year is $25 for the regular vaccination and $35 for patients at higher risk for infection, typically those over 65 years of age. Insurance plans will be billed for the vaccination. More information is available from the clinic at (928) 635-0441.