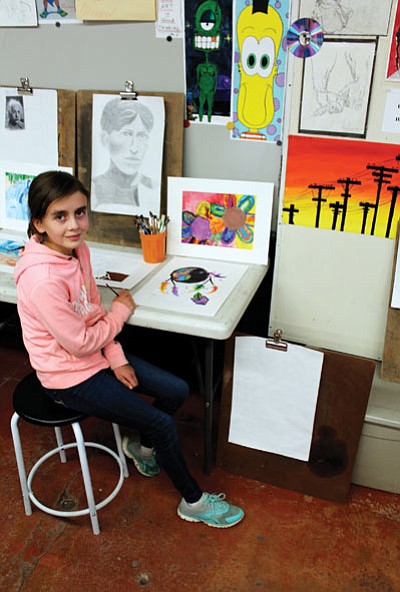 GRAND CANYON, Ariz. - It might be hard to imagine a drug free world, but that's exactly what Ellie Pearce, a sixth grade student at Grand Canyon School (GCS), hopes you do when you see her poster.

As part of a class project, Ellie's poster - a mixture of dark and light colored pencils featuring a drawing of the world surrounded by the words, 'Imagine a Drug Free World,' was chosen as the third place winner in a county-wide competition for sixth graders. Sixth graders Carter Worcester and Artisha Charley also received honorable mentions out of almost 400 student submissions.

The contest, put on by the attorney general for students in Coconino County, was a class project.

Mary Anne Cataldi, who teaches art classes to sixth graders at GCS, said even though the class only had two class periods to complete the project, they were eager to have their posters submitted.

"They had two class periods to work on it and they came in that second day and you could have heard a pin drop," she said. "We're talking sixth grade, it's not reality."

Catladi recently moved from Chicago to teach third through 12th grade art at the school and said the enthusiasm from students, especially Ellie, was impressive.

"(Ellie) is a phenomenally talented and gifted young artist here at the Canyon," she said. "More importantly she is a beautiful young human being."

Because the class had a tight deadline to finish the posters, Ellie spent extra time on it at school and even took it home to work on it.

"Not every student takes their work home," Cataldi said. "She wanted to finish it and get it in, so she did."

Each poster submitted was 9 inches by 12 inches and completed in a dry media. Ellie used colored pencils to fill in the slogan, design and background.

"I did the earth and put 'Imagine a Drug Free World' around it," Ellie said. "I picked this because I thought it was kind of unique and different and I liked the picture of the world, I thought it would be a good idea."

Ellie used colored pencils, dark blue and green for the slogan and world and used lighter colors for the background. She also used details in her drawing of the world, to help it stand out.

"I went on the Internet and looked up a picture of the world," Ellie said. "Then I drew it."

Ellie chose the slogan and design in an effort to be original and find a unique message.

"I just thought about different things and that's what I came up with," she said.

As an aspiring artist, Ellie has already pinpointed what she likes most about art.

"It's just fun and relaxing," she said. "It's a good time to do your imagination and that's what I like to do."

Currently, Ellie enjoys using colored pencils as her medium and said she has learned a lot in Cataldi's class.

Cataldi feels the same way toward Ellie and said she is a pleasure to have in class.

"I would love to have a classroom of Ellie's, and work with her and her additional accelerated projects to work on," she said.

Cataldi was informed Nov. 13 of Ellie's placement in the contest. She notified Ellie's parents who then informed Ellie.

"I was pretty excited when they told me I had got third," Ellie said.

Ellie was also recognized by her classmates during art class and Cataldi recently announced Ellie, Carter and Artisha's achievements to the faculty and school.

"(Ellie) is an amazing person," Cataldi said. "I am just so proud of all of them. My joy is when my student's succeed."

Ellie's work will be printed in a calendar for 2016 and on bookmarks that will be distributed throughout Coconino County.