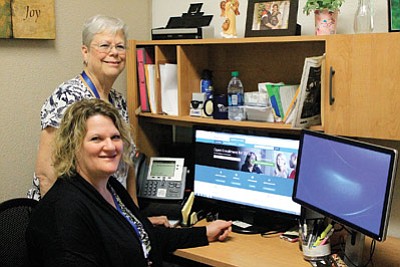 "I try to explain to them how insurance works," said NCHC patient relations representative Marilyn Fogg. "We sometimes take it for granted that we know this and there's a lot of people that have never dealt with it before."

President Barack Obama signed the ACA into law in 2010 with most major provisions phased in by January 2014. In 2015, approximately 205,000 Arizonans had signed up for coverage in the health insurance exchange.

An individual mandate requires all people not covered by an employer sponsored health plan, Medicaid or Medicare to purchase an approved ACA insurance policy or be subject to a penalty.

"In 2014 they started penalties and it's going up every year," Fogg said. "Each year they are honing in and closing those loopholes. If you have to pay the government money, you might as well get the insurance."

NCHC counselors can help people work through the process of signing up on the Healthcare.gov website. They can help individuals understand how the plans differ and direct them to which plan will suit their needs. The counselors also can educate people about things like copayments, coinsurance, deductibles, and premiums.

"I like to educate people and tell them if you pay more now, then you're going to be paying less when you go to the doctor," Fogg said.

NCHC Family Health Advocate Sarah Kircher said income and family size are the most important factors in determining tax credits. The marketplace tax credits are based on projected income. She advises people who come to NCHC to bring a paystub or the previous year's tax return when registering for insurance.

"When you start with the marketplace and your income is too low, it won't let you go any further, it will say you qualify for Medicaid," Kircher said. "We can help you with that too."

"We try to break down the barriers," Kircher said. "We want to help."

According to the HHS eight in 10 individuals who selected a 2015 marketplace plan qualified for financial assistance and the average advanced premium tax credits for those people was $270 per month.

NCHC counselors not only help people with the ACA insurance marketplace, but they can also advise and setup individuals with other available social services. They can determine if someone qualifies for Arizona Health Care Cost Containment System (AHCCCS), Medicare, or the Supplemental Nutrition Assistance Program (SNAP). They can also direct people to services found throughout the local community.

"We provide all kinds of social services help," Kircher said. "We also have in-house programs and sliding scales."

Kircher and Fogg want people to know that the penalty for not getting insurance this year has increased dramatically. This penalty will be imposed when people file their 2016 tax return.

"So the message is that for someone who is making decent money, a mother and father and two kids, that's adding up," Kircher said. "So do you want to pay that or do you want to spend an hour to come in and maybe get some insurance?"