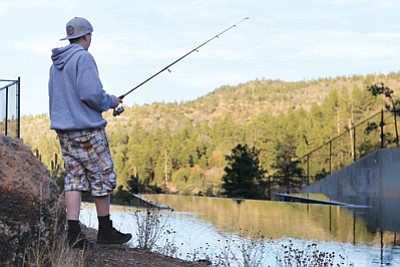 Alex Howell takes advantage of the high water level and the good fishing at Buckskinner Lake. City managers are hoping the Sweetwater Well will reduce the amount of water needed from the lakes for the city’s water supply. Wendy Howell/WGCN

WILLIAMS, Ariz. - After nearly nine months of drilling and numerous setbacks, drilling at the Sweetwater Well is finally complete and the hole is entirely cased to 2,950 feet.

Installation of the column pipe, wire and pump, and connections to the city water system are still needed to complete the project.

"This is a very big weight off my shoulders," said Williams City Manager Brandon Buchanan. "We know there's water there and we know it's going to be a good well."

United Drilling began drilling at the location north of I-40 in Williams in March with hopes of having the job completed within a couple months. Numerous problems ensued including several hole collapses and equipment retrievals that caused the project to take longer than expected and cost more than the projected $1.7 million.

"By the time we're done we're going to be close to probably 4.5 million," Buchanan said.

Buchanan said city employees are looking at different options for finishing out the project. The city needs approximately $1.3 million to pay the final bills for the well.

"We're looking at some different options through WIFA (Water Infrastructure Finance Authority)," Buchanan said. "We have to get the vendors paid and we honestly don't have the money available to do it right now unless we get some help."

Buchanan said final work on the well could be completed right away but it may not be until the spring depending on where the money comes from.

"We just have to figure out what is going to work on all the different fronts," Buchanan said. "We all have come to the understanding that we may have to wait a while to get that well into service."

Buchanan said that proper testing of the well has not been completed yet, but initial tests indicate that the well has plenty of water.

"We air pressured the hole and even under 400 psi, which is a lot of air to be putting down that hole, it was unable to lift water to the surface," Buchanan said. "So there's a significant column of water sitting at the bottom of that hole."

Buchanan said besides acquiring the equipment and connecting the well into the city system, the water also needs to be tested for arsenic. If arsenic is detected, the city will need to install a treatment system.

"The master plan (if there is arsenic) is to install an arsenic treatment plant, a small shed size, and connect the Rodeo Well over to the Sweetwater site, treat both of them for the arsenic and then go straight into the system," he said.

The city also needs to go through the processes at the state level to get approval to use the water.

Buchanan is encouraged by the completion of the drilling of the Sweetwater Well. He sees this as one step toward creating a secure water supply for Williams.

"This is an incredible leap forward from where we were two years ago where we were facing six months or eight months worth of water and then we were going to be out," he said.

Buchanan hopes to see five working wells in Williams in the future. He would like the city of Williams to manage the wells and city lakes together as a system and not face any more water crises like the city faced in 2014.

"It's all part of our plan to not get into that situation again," Buchanan said. "Which is we're going to manage our resources better than it's ever been done probably in the history of the city."

Buchanan said the plan is for the city to meet the water demands of residents and businesses with well water and to keep the lakes full with runoff and well water as an emergency backup.

"Being able to meet our total demand with just wells means we can manage our lakes a lot better," Buchanan said. "We wouldn't have to drain them and empty them right away just to supply our city. We can keep those in reserve so that in theory, if all our wells went down, we would have three to five years' worth of water sitting in those lakes."

Buchanan also believes that having a secure water source will help with the growth and stability of the city.

"That's definitely a consideration (for developers) now that there's no question we will have water for future demands," Buchanan said. "Whether that's existing demands here or demands as it grows when new development comes to town. It's really a huge safety net that we've not had in place before."