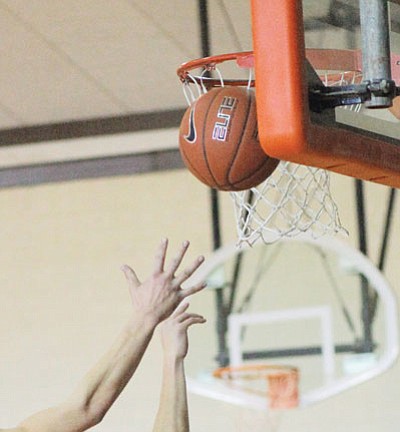 GRAND CANYON, Ariz. - Practice for basketball season at Grand Canyon School officially kicked off last week, with both the boys and girl's teams hitting the hardwood and learning to function as a team.

At this time, Jesse Magana is the boy's assistant coach for the season and Monica Nanacasia is the assistant coach for the girls. A head coach has yet to be named, however, Jeff King, who coached last year for the girls, is helping to advise both teams. Greg Walker, who bounced in and out of coaching girls and boys basketball at Grand Canyon School until the 2013-2014 season is also helping advise the teams.

Both the boys and the girls had a good turn out, with many students signing up for the season, kicking it off strong and showing up to practice every day after school.

The first action for both teams will be a scrimmage against Ash Fork Nov. 19 followed by the Williams Tournament Dec. 3 - 5.

"The boys have a few games in December," King said. "The girls start (playing games) Jan. 5."

At practice King said the boys are learning to run different plays and learning to work as a team.

"There's a lot of new players, we only have about three that returned from varsity last year," he said. "Right now it's a lot of working out and getting them fit and doing passing plays and running and jump shots. It's a rebuilding team right now."

The boy's are starting the season with a handful of seniors and juniors, while the rest are underclassmen. With around seven seniors and three freshmen, the Lady Phantoms have a good balance of upper and under classmen.

"We've got a nice returning girls team and a nice boys team," said Javier Abrego, principal at Grand Canyon School. "We are looking forward to a good season, improving from last year. We have a lot of girls going out (for the team) like 20 and the boys have 15 or 16. Those aren't bad numbers for a little school."

This season the teams will face many familiar rivals on the court, although according to King, they may not know who their greatest rivals are until they get to the game, since he is uncertain how many players some of their opponents have lost. He does anticipate some good games throughout the season.

"We used to have good battles with Seligman and Williams," he said. "(For the girls) Sanders and Red Valley Cove and maybe Williams, Fredonia and El Capitan ... I know most of them are pretty good teams."

Team captains for the boy's are seniors Ian Jones, Nick Gomez and junior Travis Moreno. The Lady Phantoms plan to choose team captains soon. King said there is a lot of potential on the team, including some underclassmen.

"I've seen a few strong leaders beside the seniors, some of the younger ones," he said.

So far the Lady Phantoms have spent there practices building physical stamina and working on lay ups, jump shots, rebounds and passing.