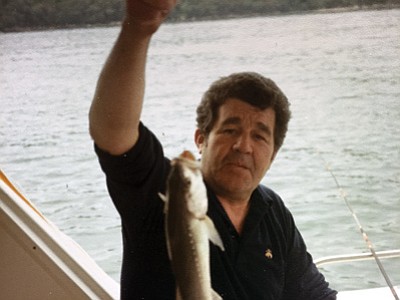 Franz X. Rotter passed away peacefully Nov. 10 surrounded by family and friends. Franz was 84 years old and leaves behind an indescribable legacy. He was born on May 27, 1931 in Schonenberg, Germany. He was one of eight children in his parent's household and started to help his family with the farm at a very young age. At the age of 14 Franz went to a trade school for the hotel industry in Lucerne, Switzerland. While working in St. Moritz, Switzerland he saw an advertisement for a chef at the Drank hotel in Chicago. He applied for the position and was hired. Franz traveled to the U.S. by Holland Cruise Line and docked in New York in 1954. He was only able to work at the Drake hotel for six months before he was drafted by the American army and stationed in Germany. He was in the army for two years and was discharged in the spring of 1958. During his army years he married his wife, Hanna, on Aug. 24, 1957.

Hanna and Franz started their life together in Chicago and had two children, Frank and Ann. After two years working as a chef, Franz started working for Fred Harvey as a night manager and worked his way up to general manager. In 1969, Franz was transferred to Grand Canyon, Arizona to work for Fred Harvey. After leaving Fred Harvey, Franz helped build the Grand Canyon Squire Inn. He then took over the Red Feather Lodge where he helped construct an additional 56 rooms for a total of 110 rooms. Because of his passion as a chef, Franz added a restaurant. After 15 years he built his own hotel, the Quality Inn, which has been expanding ever since. The hotel is now named the Canyon Plaza Resort.

Franz worked very hard his entire life and even toward the end nothing kept him away from his desk.

Franz is survived by his wife Hanna, son Frank Rotter (Janine), daughter Ann Serna (Louie), grandchildren Jackie, Jessie, Kelsey, Karrina, Danny, his great granddaughters Hannah and Emma, his two brothers Georg and Erust and his sister Kathy. Franz will be greatly missed and remembered always. Funeral services will be held Nov. 20 at noon at the Shrine of the Ages. A celebration of life will follow afterward at the Canyon Plaza Resort.