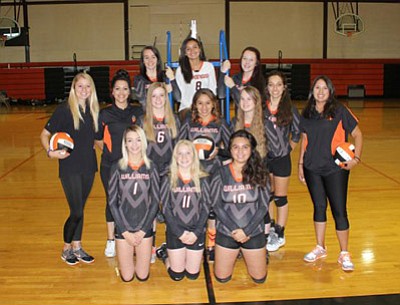 WILLIAMS, Ariz. - The Lady Vikings volleyball season came to a conclusion as the Vikings lost their state playoff game to the St. Michaels Cardinals Nov. 5. Though the team ended the season with a first round loss, Grantham noted the girls played with a lot of heart.

Sophomore middle blocker Riley Heap stepped up for her team and played the position of setter for the first time in her varsity career. Heap began the season as the junior varsity setter but was quickly moved to the varsity squad for her hitting and blocking capabilities.

"We've moved Riley around a few times this year. She stepped in and gave it everything she had. I look forward to working with her this summer," said head coach Chesney Grantham.

Outside hitter Dara Bowdon, who has been one of the most consistent players on the team all season, provided the team with offense and defense. Missing only one serve the entire match, Bowdon provided the team with points through her serving, as well as impressive digs in the back court and carefully placing the ball with kids and tips.

Grantham was also proud of the play by junior right side hitter Rheanon Koss.

"Rheanon played tough," Grantham said, "She was blocking, her coverage was spot on, she made her serves count and she stepped in to play backup setter in the last set."

Other notable mentions from the game were Kami Batterton, who rolled in with her powerhouse offense and all around enthusiasm for the game. Sophomore Paige Kmetz provided multiple digs and throughout the season has been able to show up when her team needed her most. Senior Frenchesca Pennington helped provide big blocks at the net as well as saving a couple tipped balls from hitting the court. Sophomore Destinee Pennington rounded out the team covering the court wisely and putting in every serve against the second ranked Cardinals.

"It was a tough loss," Grantham said, "but I'm proud of the seniors who helped us reach many of our team goals. It was an exciting experience for the younger girls and the bar has been set."

With the season over Grantham is beginning to look to the future. She and assistant coaches Alyssa Dennison and Tara Luedke run a summer program for all Williams High School girls hoping to play in the fall. The varsity squad will provide a volleyball clinic for the middle school Falcons and other middle school aged girls from the nearby communities in late Jan.