Winter wallops Williams: Williams sees five inches of snow in first storm of season, amount above average for this time of year 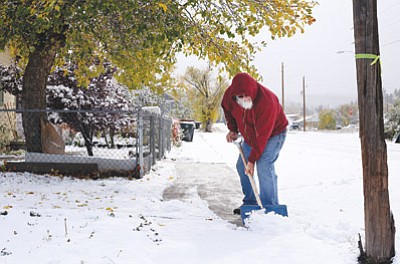 Lawrence Jaramillo shovels snow off his sidewalk on Fourth Street in Williams Nov. 4, during the city’s first snowfall of the season. Ryan Williams/WGCN

WILLIAMS, Ariz. - Winter roared in like a lion last Wednesday when a storm rolled through northern Arizona resulting in above average snow accumulation, school delays and numerous car accidents.

According to Tim Cermak with the National Weather Service (NWS) in Bellemont, Williams received 5 inches of snow, with surrounding areas reporting up to 8 inches.

Williams Unified School District and Maine Consolidated School had snow delays on Nov. 4 and 5 because of the icy roads.

According to DPS Captain Zeke Zesiger, officers responded to 204 calls for service during the storm. He said that was twice the number of calls for an average day. There were 113 calls for slide-offs and collisions.

"It was quite a bit busier," Zesiger said. "The majority of the calls were for non-injury collisions or slide-offs without damage."

Cermak said the first measurable snowfall is typically the second week of November, so this storm's timing was near the average. However, the amount of snow for this time of year was above average.

"Our average first five inches or greater snowfall is December 17, so it came about a month early," Cermak said.

"It dropped off pretty quickly beyond Williams," Cermak said.

Cermak said the storm produced very wet snow that melted in the morning. However later in the afternoon as the temperatures dropped, snow accumulated quickly.

"We got some upslope that kicked up in the evening," Cermak said. "And we got some pretty heavy bands that moved into the Flagstaff and Mogollon Rim areas in the late afternoon and evening."

According to the NWS Climate Prediction Center, this year's El Nino is on pace toward becoming one of the strongest such events on record, as measured by the unusually mild ocean temperatures in a huge portion of the Pacific Ocean. This year's El Nino is expected to be similar to the winters of 1997-1998 and 2009-2010.

For the Southwest, El Nino results in below-average temperatures and above-median precipitation. The Oct. 15 seasonal outlook lists a 40 to 50 percent chance of above-normal precipitation for northern Arizona this winter.

El Nino is the warming of sea surface temperatures in the equatorial Pacific Ocean that occurs every two to seven years where this area of the ocean warms for six to 18 months.

"El Nino itself didn't make this storm any stronger than any other one," Cermak said. "It more likely will increase the frequency (of the storms) than it will the intensity."

Ch, ch, ch, chilly: snow fall drops 18 inches at Grand Canyon's South Rim
What happened to winter in northern Arizona?
After warmest winter on record in Arizona, monsoon could be a wet one
Is the drought over? El Niño delivers wetter than average conditions to the southwest
El Nino ramps up, set to be one of strongest winters on record
Event Calendar