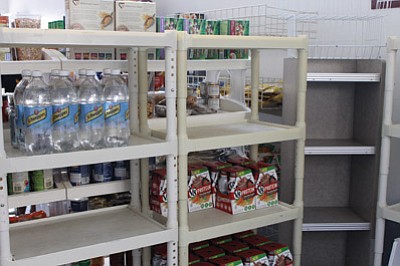 Shelves sit empty at the Food Bank. Volunteers are hoping to fill them with holiday food donations. Wendy Howell/WGCN

Williams Food Bank Director Guy Mikkelsen is hoping every family in Williams can put these items on the table this Thanksgiving and is asking the public for help.

"We had about 400 families who got assistance from us last November," Mikkelsen said.

Mikkelsen said the Food Bank is in need of food and monetary donations. He said it is often difficult to get typical holiday trimmings at the Food Bank. He is asking people and businesses to bring donations of canned green beans, canned corn, stuffing, mashed potato boxes, gravy and any other canned or boxed items that pair nicely with turkey. He said many families hope to provide a holiday meal for their families at Thanksgiving, but it is often financially out of reach for them.

The Food Bank held a mixer with Williams Chamber of Commerce on Nov. 6 and has kicked off a food drive throughout the community.

Food donations are being accepted at Williams Elementary Middle School and the Food Bank. Parents can send canned and boxed food for donation with their children to the school.

Safeway is collecting food donations by encouraging patrons to purchase a Hunger Bag that is full of holiday trimmings. Customers can purchase the bags at checkout and they will be placed in a donation box at the store.

"I get them from Shamrock Foods because they give me the turkeys at wholesale restaurant prices," Mikkelsen said. "We had two pallets full of turkeys."

Residents can visit the Food Bank once each month to collect supplies. The Food Bank is set up like a grocery store where those in need can use a cart to collect the items for their families.

"We see almost double the number of families in November as compared to other months of the year," Mikkelsen said. "We appreciate anyone that can help."

Anyone interested in donating food or money can contact Mikkelsen at (928) 635-2913 or drop by the Food Bank at 200 S. 9th St. in Williams. All donations are tax deductible.