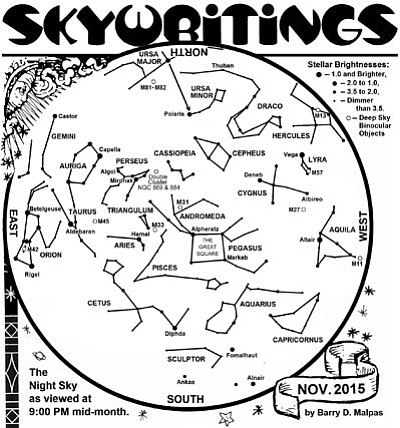 Since very early times, humans have looked to the stars and planets wondering if there might be life beyond the bounds of Earth. In the 1700s and well into the 1800s, some astronomers guessed that life must be on each of the planets in our own solar system for the simple reason: "for what other purpose would they have been created?"

However, this was not science, only wishful thinking. In 1877 the Italian Astronomer Giovanni Schiaparelli observed what appeared to be a network of linear structures on the surface of Mars, which he called "canali," which means channels. But the term was misinterpreted to mean "canals." Of course, channels can be a natural occurrence, but canals would have to have been constructed and implies intelligent beings, such as humans.

This discovery led several astronomers, including Percival Lowell in Flagstaff to try to find further evidence of extra terrestrial life on that planet. Unfortunately, the science and technologies of the times were not advanced enough to make such a determination. It would not be until the latter part of the 20th and beginning of the 21st centuries when the Hubble Telescope could view, and space vehicles could orbit and land on, our neighboring planets providing the conclusion that we are basically alone in our solar system, except for possibly a few extra terrestrial microbes on Mars, and the moons Io and Titan.

Now, with technologies becoming more and more advanced, having large orbiting telescopes, and extremely sensitive imaging and spectrographic equipment available to us, as well as the use of Radio Astronomy, we can penetrate the depths of space as we have never been able to before. In the last 50 years people have detected nearly 200 complex molecules that exist in interstellar clouds. A dozen of these molecules are amino acids, the precursors of life. So it is possible that these building blocks might be able to generate life when they arrive on a planet having the proper environment. Hence the search for exoplanets, planets circling other stars.

The primary method for discovering exoplanets is called the transit method. A transit occurs when a planet passes in front of a star and its brightness dims a little bit. Of course, most planets will not be visible to people in this manner since only a small percentage of them have orbits that will take them directly between their star and us. The technology needed to detect large planets around other nearby stars is currently available to even amateur astronomers with moderate sized telescopes (albeit a bit pricey).

About 2,000 exoplanets have been discovered. However, to detect the smallest planets, about the size of Earth, requires observations above our wiggly atmosphere. This is what the Kepler spacecraft is designed to do, to survey our region of the Milky Way and discover Earth-sized extra-solar planets in or near the habitable zone, and estimate how many of the billions of stars in the Milky Way have such planets. The habitable zone is the distance from the star that a planet would have to orbit so water could exist in predominately liquid form, a place where organic life might have evolved. Currently the "Habitable Exoplanets Catalog" lists about two-dozen Earth-sized planets having the best chance for having life beyond our solar system.

Astronomers are observing stars that are similar in size to our own sun and smaller, since much larger stars have much greater masses, which give them a much shorter life span. These large stars would most likely go nova before any type of advanced life could arise on an orbiting planet. And, of course, they are looking for life as we know it - Carbon based.

This year there have been three candidate planets that have been discovered within the habitable zone of their respective stars. They are Kepler-438b, Kepler-442b, and Kepler-452b. Kepler-438b orbits about a Red Dwarf, M-Type, star in 35 Earth-days, has a radius about 10 percent larger than the Earth's, and is currently the most Earth-like planet detected having a temperature range of 32 to 140°F and an Earth Similarity Index of 0.88 (Earth being 1.0.) Kepler-442b has a radius about 30 percent larger than Earth, resides about a K-Type star, with a "year" of 112 Earth-days. Its' temperature is a chilly −40 °F and has an ESI of 0.84. The Exoplanet Kepler-452b orbits a G2 star, almost identical in size to our Sun. It is about 60 percent larger than Earth and orbits its' star in about 385 Earth-days. Its' temperature range is from -6 to 45°F with an ESI of 0.83. One of our next steps is for Astronomers to detect water and other hydrocarbons at the surfaces of these and other near Earth sized planets using spectroscopic analysis.

Will we ever travel to these planets? We probably will not in the forseeable future. Exoplanet 438b is 470 light years from Earth, while 442b is 1,120 light years away, and 452b is 1,400 light years out. So until Zefram Cochrane invents that Warp Drive, we're out of luck.