Let it snow: Grand Canyon gets first snow of season 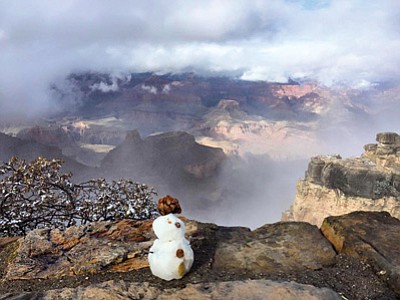 The first snowman of the season gets an up close view of the Canyon after the season’s first snow storm Nov. 4. Erin Whittaker/NPS

GRAND CANYON, Ariz. - There's nothing quite like the first snowfall of the season. When it happens at Grand Canyon National Park, it ups the ante even more.

The Nov. 4 storm marked the beginning of what could be a cold winter at the Canyon. According to most weather forecasts, including the National Oceanic and Atmospheric Administration (NOAA), this winter could be one for the records.

"At this point, we are fairly certain that El Niño will remain on the current trajectory, and we will see one of the top three strongest events on record since 1950," said Ben McMahan, research, outreach and assessment specialist for climate assessment for the Southwest, in a recent interview with Cronkite News.

The recent storm did not dump very much snow on the South Rim, with eye witnesses reporting a maximum of around two inches on the ground, which reportedly melted as soon as the sun came out.

The Canyon itself creates unique storm patterns that have, in the past, created phenomenas that include rare cloud inversions.

Cloud inversions are created when there is a change of atmospheric property in the altitude, the increase in temperatures produce inversions. During an inversion, the lower atmosphere - the air near the surface of the ground is warmer than the higher air. This is caused when the atmosphere is heated by solar radiation from below, allowing warm layers of the atmosphere to rise directly above it. Cloud inversions at the Canyon occurred twice in the last 10 months.

With sunshine in the forecast, it is hard to predict what the weather will throw at the Canyon over the next few months. Mike Halpert, deputy director for the Climate Prediction Center, said in an email to Cronkite News, to expect a cooler and wetter winter.

"Going forward, the forecast does favor wetter-than-average conditions all the way into the spring, with the January - March season the most likely three month period to be wetter than average," he said.

Is the drought over? El Niño delivers wetter than average conditions to the southwest
What happened to winter in northern Arizona?
Weather Service winter forecast: A bit warmer, but likely chaotic
NOAA: winter weather could be strongest since 1997
Winter weather warnings for Grand Canyon National Park
Event Calendar