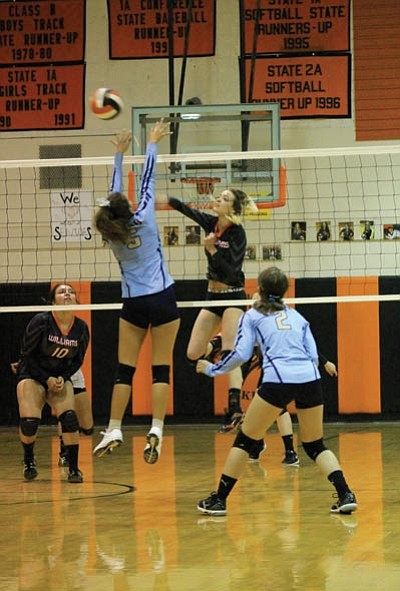 Dara Bowdon gets one past a defender in the game against Phoenix Day School for the Deaf. Wendy Howell/WGCN

WILLIAMS, Ariz. - The Lady Vikings volleyball team finished the 2015 season Oct. 29 with a three game sweep of the Seligman Antelopes. The win against Seligman left the Lady Vikes undefeated within their section. With the regular season over the Lady Vikes will head to the Arizona State Playoffs as the Section III champions

"We are proud of all the girls. The have worked hard all season," Grantham said. "Everyone stepped up and made it known that they came to play."

Seniors Andrea Hernandez and Dara Bowdon have led the team. Hernandez, the team setter, had more than 1,000 sets over the season. She was key to the offense in setting up outside hitters Bowdon and junior Kami Batterton who each had more than 90 kills. Both Bowdon and Batterton put in extensive back row training, earning their full rotation positions, something Grantham said is "very impressive" since neither played back row before during their high school careers.

After talking a year off after shoulder surgery, junior right side hitter Rheanon Koss came in learning a new position and contributed both offensively and defensively.

"We've seen big improvements from Koss," Grantham said. "Her right side is an asset to the team not many other teams had."

Rounding out the varsity squad are sophomores Paige Kmetz, Riley Heap and Destinee Pennigton. Kmetz played the position of middle blocker and contributed to the team with a 93 percent serving average. Pennington was the defensive specialist and in the position of libero she had more than 400 digs over the course of the season. Heap began the season on the junior varsity team before being promoted to the varsity middle blocker. For the final regular season game Heap was moved to the setter position.

"Riley stepped up. She has done everything we have asked her to do, it's the kind attitude we love to see," Grantham said. "She has a lot of potential and I'm excited to see her improve."

"These girls play with confidence and are very exciting to watch. I couldn't ask for a more respectful, hard working group of girls. They never once gave up and that makes me very proud of them all."

Despite losing two strong seniors with Hernandez and Bowdon, Grantham said she is excited for the future of the Vikings Volleyball. She praised the dedication of assistant coaches Alyssa Dennison and junior varsity head coach Tara Luedkte.

"They've helped out tremendously and sacrificed a lot of their time for the girls," Grantham said. "We all brought changes to the program and I'm very happy with the results."

The Lady Vikes finished the season with a 15-3 record. The team went undefeated within section play with their final record being 10-0. The team will travel to Prescott Nov. 6 to play their first playoff game.