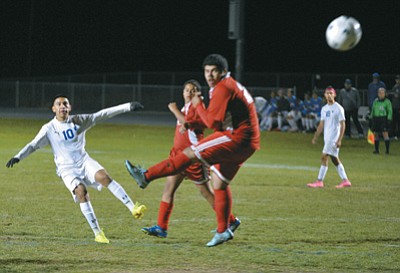 Israel Herrera, a captain for the Phantoms, plays mid-field during the Oct. 22 game against Chino Valley. Matt Hinshaw/Chino Valley Review

GRAND CANYON, Ariz. - The Grand Canyon Phantoms boys soccer team wrapped up the season Oct. 22, with their last game against the Chino Valley Cougars. The Phantoms walked away with a 17-0 loss.

This has been a growing season for the Phantoms, who have been hampered by injuries and big losses in every game but one. The team overcame many obstacles this season, which seemed to challenge every aspect of the Phantoms game. Despite their losses, they held their heads high and proved that attitude can make or break a team.

"We got to play against Chino Valley and that team is really good, (they've been) first in the state for a couple of years," he said. "We thought, 'this is where we can prove our point,' and I mean we did good - it was frustrating, we lost big, but we kept our composure, we stayed in the game and we played our hardest."

The game kicked off with the Cougars winning the coin toss and taking the opening kickoff. In the first two minutes of the game, the Cougars' scored their first goal. Chino maintained control of the ball and kept it in the offensive zone for most of the game. The Cougars used a lot of verbal communication and team play to move the ball around the zone. Grand Canyon put up a strong effort at trying to clear the ball from their zone. However, Chino intercepted the clearing attempts and turned them into scoring chances or goals. The first half ended with Chino leading 11-0.

The Cougars defeated the Phantoms 17-0, getting the Cougars, last year's defending state champions, ready for this year's playoffs.

"We didn't give up, we kept playing," Magana said. "They (Chino Valley) were a great team."

Magana believes having an all boys team - this was the first year not having co-ed teams at Grand Canyon, did translate into a tough season for both the boys and the girls. However, he also believes it challenged them and gave them experiences they might not have had otherwise.

"I think it would have been good to have the girls - that competitive edge at practices and matches, but at the same time I thought it was really cool because all of our players got that experience," Magana said. "They all got to experience every game."

With small teams, both the boys and girls played every game short of players or used every player. According to Magana, the Phantoms had several underclassmen who showed exceptional progress over the season. Many of the younger teammates had never played but proved to be quick learners.

"It didn't take them long to get comfortable," he said. "We had a player who is a freshman, Aleryn Reid, it was his first year playing and at first you could see he was a little hesitant but after a few weeks he got comfortable and a little more aggressive on defense and he turned out to be one of our better players and athletes."

Other teammates fleshing out their talents this season included Israel Herrera, a sophomore and captain on the team playing forward and mid and Herman Yellowhair who proved to be strong in defense and mid field.

"He (Herrera) was a great leader this year," Magana said. "He's got great footwork...Herman Yellowhair at first you could tell he wasn't aggressive and a little hesitant, but after a couple of weeks with him getting that game time experience he really improved. All the players greatly improved."

As a first year coach, Magana said the heart of the team and how quickly the team accepted him, really impressed Magana.

"Rolling with them and the whole experience was a learning experience," he said. "I could only prepare myself and teach myself so much for my first year of coaching. I think it was really cool how much the team was behind me. They had my back. I learned that this community, this school has great heart and great energy."

Next up for the Phantoms is basketball season, with practice kicking off for the high school Nov. 2.