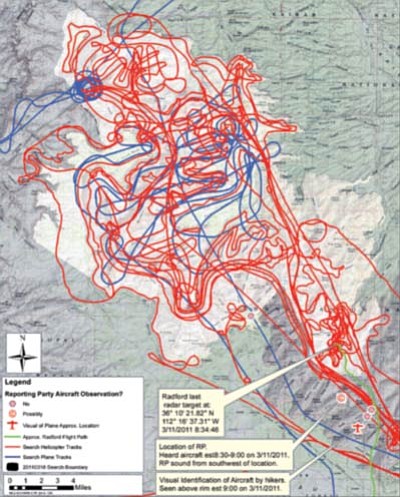 GRAND CANYON, Ariz. - On May 20, while on a hike near Emerald Canyon at Colorado River Mile 104, members of a private boating trip found the wreckage of an airplane with human remains inside.

The group reported the find to park rangers at Diamond Creek in Grand Canyon National Park.

Weather prevented rangers from responding to the scene by helicopter until May 24. At that time, rangers recovered the remains, which the Coconino County Medical Examiner is working to identify.

Rangers then packaged the plane in a sling load and recovered the wreckage using a long-line.

The wreckage matches the description of a red RV-6 homebuilt experimental aircraft that went missing in 2011.

On March 11, 2011, the RV-6 was seen at Grand Canyon Airport around 8:30 a.m., later the Grand Canyon Airport, located south of the park, received a report from a general aviation pilot of an activated emergency locator transmitter (ELT). Because the ELT had been detected approximately 30 miles northwest of Grand Canyon Village in the vicinity of Fossil Corridor within the park, the airport notified the National Park Service (NPS). The park's search helicopter flew over the area in the vicinity of the reported ELT activation, but did not find any signs of a downed plane or the beacon.

During the 2011 search effort, the NPS used both a fixed-wing airplane and a helicopter to cover over 2,000 air miles over a 600 square-mile search area. The Civil Air Patrol's Nevada Wing, Coconino County Sheriff's Office and the Air Force Rescue Coordination Center assisted in the search, which continued on a limited basis until after April 1, 2011.

On March 14, 2011, the NPS was contacted by the Coconino County Sheriff's Office (CCSO) about a missing person, 47-year-old Joseph Radford of Glendale, Arizona.

Based on radar tracking information from March 11, the NPS helicopter concentrated search efforts in the Scorpion Ridge area, located in the vicinity of the Dragon Corridor. By March 12, the park's helicopter and fixed-wing aircraft flew search patterns in the Fossil Corridor and Scorpion Ridge areas, without success.

After unsuccessfully locating the plane, CCSO continued its investigation and began contacting backpackers known to have been in those areas to determine if anyone had seen or heard the plane.

Interviews with backpackers indicated a plane was heard at the time of the RV-6's flight on March 11 and one hiker remembered seeing a red plane flying overhead in that area.

The pilot of the RV6 was identified as Joseph Radford, a 47-year old white male, with blue eyes, graying hair and a receding hairline. He was 5'11" tall and weighed approximately 190 pounds. Radford's plane was described as an RV-6 Kit Built, cherry red airplane with tail number N650RV.

At this time, the Coconino County Medical Examiner is working to identify the remains found at the wreckage and the National Transportation Safety Board is investigating the incident.