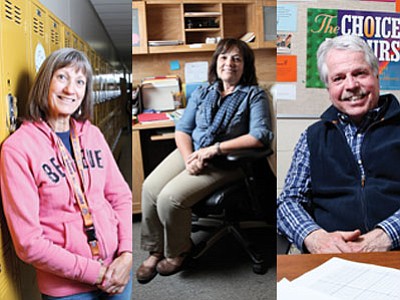 From left: Mary Maze, Denise Heiss and Bob Farrell all retired from the Williams Unified School District at the completion of the 2014-15 school year. Ryan Williams/WGCN

Bob Farrell began counseling students at Williams Elementary-Middle School (WEMS) in 2006. Prior to that he worked in Cave Creek at Cactus Shadows High School for around 14 years

Farrell said he started at WEMS when the current eighth grade class was in kindergarten.

"So I've been the person they look for their very first day they come to school because they know me," he said. "I'm the only one they have probably known for eight or nine years at this school with the same face."

Farrell said consistency at school is important in the Williams community.

Farrell will continue to work at the Maine Consolidated School District as a part time counselor, something he has been doing for the past few years on Fridays.

He also plans to work on the Navajo Reservation with a school psychologist around three times per month. It is a bit like coming full circle professionally. His first professional job was on the Hopi Reservation.

"I lived there for five years. I lived in Polacca and I worked in Kykotsmovi," he said. "I worked for the Hopi Education Department and I worked with identifiable gifted kids who were interested in going into the medical field."

Farrell said he will miss his interaction with the students in Williams the most.

"Without a doubt," he said. "And you know, obviously some of my colleagues."

Mary Maze wrapped up 19 years of teaching in the Williams School District last week. She taught fourth and fifth grade and, most recently with the Fit Kids program.

She said after 35 years in education it is time to move on to her next season in life.

"Which is hanging out with my grandchildren," she said. "I have some in New Jersey and some here."

Maze said she will miss her students more than anything else.

Before coming to the Williams District she taught junior high and elementary physical education for 17 years in Lake Havasu City.

Maze will travel a bit to see family and maybe find another job in the future.

After 13 years, Denise Heiss retired from her counseling position at Williams High School last week. Before her time in Williams, she worked in Patagonia.

"So I've had two long-term experiences in small and rural schools," she said. "I wasn't planning on staying so long but it's just so great to work in a small school. I really fell in love with the kids right away."

Heiss said over the years she has had the opportunity to really get to know her students and build relationships.

"I think you can be a better guide," she said. "Help them answer some questions for themselves and build a plan for moving forward. It's really fun to get to know them. In a small school you are the only counselor so you are meeting a lot of different needs. We don't have a lot of resources in our community so you do establish those strong relationships. I think for me that's the most satisfying thing. To see the students learn how to manage themselves and decide for themselves, learn from mistakes. It's rewarding. And I've never been tired of that."

As for her future plans, Heiss said they are open ended.

"And no plan feels good right now," she said. "I bought a new suitcase."

Her four grandchildren will likely be a big part of her future along with family in Patagonia.