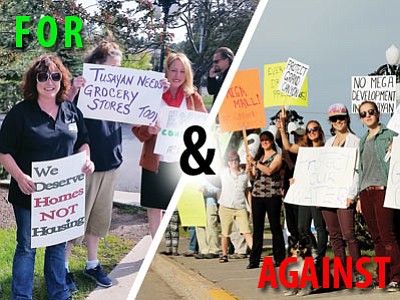 TUSAYAN, Ariz. -Town of Tusayan residents, Sierra Club members and residents from around Arizona stood outside the Doubletree by Hilton in Flagstaff holding conflicting messages with statements like: 'Protect Grand Canyon,' 'Leave it as it is - like Teddy said,' 'No mega development,' to 'We deserve homes not housing,' 'Tusayan needs more grocery stores' and 'Leave Tusayan's business to Tusayan' to protest the potential development by the Italian based developers Stilo.

Protestors from both sides of the issue came out to make a statement and comment at the public scoping meeting held by the Forest Service for road easement applications across Forest Service land from the town of Tusayan to the propsed development.

If approved, the easements would allow access to the highly controversial development.

The town of Tusayan, lies at the entrance to the South Rim entrance to Grand Cnayon National Park, a reason why the development is so controversial.

Alicyn Gitlin, program coordinator for the Grand Canyon chapter of the Sierra Club, said the decsion made by the Forest Service to deny or grant the road easements to the properties could also determine the fate of the proposed development.

"We need to protect Grand Canyon. This is not the appropriate place for a development this size," Gitlin said. "The 3.5 million square feet of commercial space is not as important as the health of Grand Canyon."

Around 50 people from the Sierra Club and residents of Arizona showed up at the Doubletree in opposition of the development.

"We have a lot of people who are just members of the community who care about the Grand Canyon," Gitlin said. "We have people who drove up from Phoenix to participate and some hoteliers and business people who feel this (development) is going to unjustly give a monopoly on Grand Canyon tourism to a single developer."

"This is our chance for housing," said Cheryl Strobeck. "The development stuff, to the people who clean the toilets and make the food, they don't care. We want a place to live that is decent and our employer doesn't have 24/7 control of us."

Surrounded by Forest Service land and the national park, Tusayan residents do not have access or the ability to own private land or housing. In an agreement with Stilo, the town of Tusayan was promised 40 acres to be used toward creating affordable housing. The 40 acres are located on the development properties.

For Strobeck, a resident of Tusayan since 2004, housing is what approval of the road easements mean. She believes the Stilo development will not last.

"If it happens, it happens, I personally don't believe that Tusayan can support the development they're seeing," she said. "I don't see how people are going to drive out there for it (Stilo development). I just don't see how it's going to support it because the tourists don't care about that - they want to go see the Grand Canyon."

Kathryn Kanallakan, a resident of Valle for 63 years who has worked at the Canyon for four years, agreed that it was important to make a statement. Kanallakan's sign read, 'Tusayan needs grocery stores.'

According to Kanallakan, the price of a gallon of milk in the town of Tusayan is over $6.

"The pay is not compatible, you're looking at $8 to $9 dollars an hour in Tusayan and they start at $10 in Hawaii," she said. "I think it's time for a change, Tusayan needs room to grow, its been stunted too long."

"One of things that's been frustrating for Stilo is that people have been saying that there is going to be a big mega mall, bigger than the Mall of America or there's going to be 10 Wal-Marts or a bunch of big box stores," Jacobs said. "I think what Stilo hoped to do by being at these meetings is to talk to people and explain what our vision is."

Of the three meetings, Jacobs said Stilo anticipated that Flagstaff would garner the most controversy.

"We figured Flagstaff would be the one with the most opposition to these Tusayan easements," he said. "The city of Flagstaff actually passed an ordinance opposing these easements and there's been a couple of op-eds in papers from hotel owners claiming more development in Tusayan would hurt their businesses."

Jacobs said questions asked of Stilo by protestors had been thoughtful.

"Its been a friendly group of people on both sides," he said. "I think its something that people care about and can honestly disagree about, but we shouldn't make it personal with anybody and we hope we aren't."

One of the main questions asked Stilo is where the development plans to get its water.

"Obviously water is a big concern for a lot of people," Jacobs said. "Stilo hopes during this process to identify a water source once and for all, and once we do, we will be able to have that conversation in a more articulate way with the public."

According to Jacobs, Stilo has met with stakeholder groups concerning the water issue and is looking at alternative means of supplying water to the properties.

According to Dr. Robin Silver, co-founder and board member for the Center for Biological Diversity, the center has received more than 51,623 comment letters from its members in opposition to the development and road easement approvals.

"So far, to date, from our membership alone, 51,623 comment letters to the Forest Service from the Center for Biological Diversity," Silver said. "There are several hundred in the Flagstaff area and around the world - in rounded numbers, there's about 825,000 and they care about the Grand Canyon."

According to the Center for Biological Diversity (CBD) website, the focus of the center is on protection of land, water and climates for species survival using biological data, legal expertise, and citizen petition provisions of the Endangered Species Act, in order to obtain sweeping, legally binding new protections for animals, plants, and their habitat.

For Silver, the issue is about protecting the Grand Canyon and not about affordable housing for locals.

"That's the issue tonight, it's not about whether people in Tusayan have to drive 15 minutes from Valle to get a place to live," he said. "The issue is about the Grand Canyon."

Environmental concerns top the list for the center as well as concerns about the potential impacts the development would have on regional business.

"There are two concerns and they have to do with environmental issues and then there's the business community, because that's going to suck business out of everyone else, including Williams," Silver said.

"The project will overwhelm the already overwhelmed infrastructure of Grand Canyon Park, not to mention negatively impact Havasupai Falls and Indian Garden," Silver said in an email. "Then there is water, Stilo/Tusayan have no viable options. Either others own the water rights, or the Stilo/Tusayan development will destroy the springs and seeps of the South Rim within the park and will negative impact Havasupai Springs."

Easement application and the Forest Service

According to Jacqueline C. Banks, public affairs officer for the Forest Service in Kaibab National Forest, many who attended the three public scoping meetings were there to get information. The majority planned to submit their comments to the Forest Service before the comment period closes on June 2.

"A lot of people were coming to just get some clarification on what exactly is being proposed and we were able to provide that information," Banks said. "We are trying to emphasize just how critical it is that people take this opportunity to provide their comments. Because that is really going to drive the issues that we are going to be looking at in the environmental review."

Some comments the Forest Service has received include what the impacts will be to the Grand Canyon, where water might be coming from for the development and the process used by the Forest Service in determining the outcome of the application.

"People seem to have already been hearing about what potentially is on the table," Banks said. "What's really important is that people need to get their comments in by June 2. We continue to accept comments but that's going to really be important for us to be able to take the comments we receive during this pubic scoping period and determine, first of all whether this is going to be an Environmental Assessment (EA) or an Environmental Impact Statement (EIS)."

Whether the assessment is an EA or an EIS will determine what direction the Forest Service takes during the analysis period and the length of time the assessment will take.

"We should be able to come out fairly soon after the public scoping to announce which direction we are heading in terms of the EA or EIS," Banks said. "It's a lengthy process, an EA takes about a year and an EIS significantly longer than that."

Recently, the Grand Canyon National Park requested and was approved by the Forest Service to be a cooperating agency on the project.

"That basically means that we believe the National Park Service has a special expertise to bring to the table, in terms of the environmental analysis," Banks said.

"The analysis will include plans for the potential future development of the private in-holdings, but basically, our decision is to either approve easements as the town of Tusayan have proposed them, to approve them with modifications or to deny the easement as proposed, which would leave access to the private parcels as they currently exist," she said.

According to Banks, up to this point, the Forest Service has received a large number of public comments at all levels - internationally and locally.

"We're hearing from a broad spectrum of members of the public with lots of comments coming in," she said.

Two separate road easements to Kotzin Ranch are being considered in the Forest Service's analysis and one easment to Ten X.

Pete Shearer, a long time Tusayan resident who has served a number of years on the Grand Canyon School Governing Board, said one of the proposed roadways to the Kotzin property will cut across the future site of a school in Tusayan.

"It doesn't make any sense to put millions of people in close proximity to our kids," he said. "We're asking for a disaster, there's people from all over the world...if one kid gets abducted, what have we accomplished by taking the easiest route?"

The other proposed easement to Kotzin, going off Highway 64 is, to Shearer a better decision, however he believes more research and time should be spent before making a definite decision on either.

"With the massive amounts of traffic that's proposed to go to Kotzin, whether it goes through the school site or on Highway 64, we need to do a traffic study in order to properly plan," Shearer said. "They only have one access into Ten X proposed, so they don't need two accesses into Kotzin."

Along with many others, Shearer questioned where Stilo plans to get its water for the development.

"I like to hike in the Canyon and they haven't provided a solution to water," he said. "It's pretty much a given that seeps and springs are going to dry up on the Tonto Plateau, so it's going to make it inaccessible to enjoy it, as I've enjoyed it for the last 45 years."

Shearer said he hopes more study and time goes into the decision.

"At the very least, the development needs to be geared down," he said,