Drilling to begin on Sweetwater Well in Williams 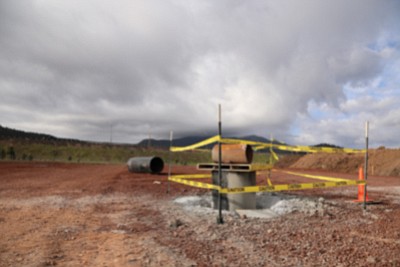 WILLIAMS, Ariz. - United Drilling has set a 45-inch conductor casing in the city of Williams new Sweetwater Well located on a 16-acre piece of city-owned property north of Interstate 40 on Airport Road.

According to Williams City Manager Brandon Buchanan, the casing goes down 120 feet.

Beginning this week, United will be on site to begin drilling the 4,000-foot well hole - two months of work.

"And then we'll have some idea of what is down there," Buchanan said. "We did all the testing up front and that is why we picked that site but actually what is down the hole and how much water it will pump we won't know until we get equipment down it."

United Drilling has drilled three out of four of Williams' wells: Dogtown 3 Well and Rodeo Well, which are producing wells, and Dogtown 2, which turned out to be a dry hole. A different company drilled the Dogtown 1 Well.

The city recently delivered pumps and motors to the GE shop in Casper, Wyoming for a rebuild.

Williams City Manager Brandon Buchanan said the city worked out a deal with GE for repairs.

"They're going to replace the equipment with some more specialized equipment," Buchanan said. "Our commitment is to buy the drive equipment for that well, which is the computer at the top, which we know needs to be replaced anyway. So I think a very good deal for us."

Buchanan said that equipment should be back in Williams sometime in the next few weeks.

Once back in operation, Dogtown 1 should produce about 150 gallons per minute.

"At this point we're done messing around with the well," Buchanan said. "There is a busy summer season coming and we need water and 150 gallons is better than nothing. And I don't want to spend any more money down that hole right now. "