Run for the Wall: respect and gratitude on wheels
Williams American Legion Post No. 13 and Mathew J. Broehm VFW Post 12128 play host to Run for the Wall Riders May 13 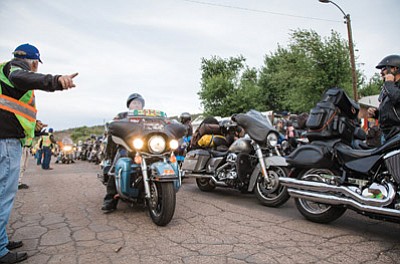 Run for the Wall riders find parking spots in front of the American Legion in Williams. Ryan Williams/WGCN

WILLIAMS, Ariz. - The annual Run For The Wall motorcycle ride to the Vietnam Memorial in Washington, D.C. rolled into Williams May 13.

The block in front of American Legion Post No. 13 was filled with close to 400 bikes, riders and veterans from Williams.

The Run for the Wall began in 1989 when two Vietnam veterans, James Gregory and Bill Evans, rode their bikes across the country talking to local radio stations, newspaper and television stations about the thousands of men and women still unaccounted for from U.S. wars.

According to the Run for the Wall organization, the need for this awareness continues today and the group continues this tradition every May. Public awareness is only part of the Run For The Wall. The ride provides all veterans the opportunity to get their own welcome home and start their healing process.

The Run for the Wall crew has been stopping in Williams for years. Some of the riders have made the ride annually for more than a decade. They know each other.

The American Legion has been feeding the riders for the same number of years. The Mathew J. Broehm VFW Post 12128 auxiliary served breakfast the next day along with the Wild West Junction.

Rodger Ely, a member of the Legion and VFW in Williams, said the event was a great success.

"They were very thankful," he said. "We welcomed them as a host and they accepted that."

"I think we need to instill in the community that this is a community event," Ely said. "It's just that the hosts happen to be the mayor, the Legion and the VFW."

Community members and organizations help make the event a success. Guy Mikkelsen and the Williams Food Bank help with food along with Safeway and a number of community members. The Legion buys the meat for the pit barbecue meal. The American Legion Auxiliary provided dessert.

"Community people were hands on to help us do it because if we just did it from the American Legion it would cost us a couple grand," Ely said.