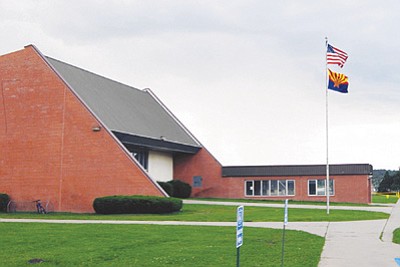 WILLIAMS, Ariz. - Williams Elementary-Middle School (WEMS) was five points away from earning a C rating this year and school board members are looking for ways to improve the rating.

Dr. Charlotte Wing, an educational consultant with Wings Educational Services, LLC conducted a detailed needs assessment report for Williams' school board. She presented her report to the school board during the May 13 meeting.

Using time-tested processes to assess the needs of the school, including AIMS (Arizona's Instrument to Measure Standards) testing and student growth achievement data, staff member surveys, student focus groups and classroom observations, Wing compiled her research and made several observations and recommendations for WEMS to consider in its efforts to improve student achievement.

"The primary issue we need to address is teaching to the standards," Wing said. "It went along with what a student told me, that when she is tested at the end of the school year, she's hasn't always been taught what she's being tested on."

According to Wing, an indicator of good teaching and a point that ranked low at WEMS, is students' abilities to retain knowledge and think about what they were taught and why.

"We want the teachers to do the teaching but then we want the students to be able to think deeply about it, as they're demonstrating they can meet the standards," she said. "Where they're remembering it and transfer it."

According to Wing, many teachers are planning learning activities that are not always based on the standards and most students do not know what standards they are learning and why learning is important.

Wing said she believes with extra effort and training these problems can be turned around, improving student engagement in the classroom. She also recommended implementing re-teach and intervention programs.

"All teachers need to implement standards based instruction and not only teach it but ensure that the students are mastering the standards," she said. "That's good to do with re-teach and interventions. I would also recommend ongoing instructional coaching along with specific professional development that would provide the tools and strategies that teachers have indicated to me that they want."

School board member Ann Wells, who sat in on several classroom observations, said the analysis was well done and thorough.

Wells said Wing's report validated what was presented to the board during an exit report during its accreditation process.

"The need for professional development and training, aspects of leadership, parent and community involvement are some of the things we need to improve on," she said. "I saw a very close alignment with that and I think this is invaluable information and we (have) needed it for a long time to target what has not been going well and how we need to improve."

While compiling research for the report, Wing met with WEMS School Principal Bryan Lords in March and observed all classrooms at WEMS - twice.

"We look at the instruction that is happening in the classroom to see if we can pinpoint areas, that if we improved, will make a difference," Wing said.

In addition to classroom observations, Wing held focus groups with students and asked several questions, including what they thought was working well in the school, suggestions they had for improvement, what kind of things teachers do to help them learn and what kind of things prevented their learning. Wing said feedback from students about teacher availability was unanimously positive.

"To a student, they felt like the teachers cared about them and cared about their success and were willing to meet them before school and after school to be of help to them," she said. "I think that is very positive."

"Generally the feedback was positive. Of course when anything new is introduced there is always a little bit of anxiety," she said. "Overall I felt very positive about it."

Wing conducted observations at the high school but did not have time to complete the report before the end of the school year.

School officials and Wing agreed the remainder of the analysis should be completed for the high school after the beginning of the school year.