Northern Arizona Astronomy: it's all about the dust 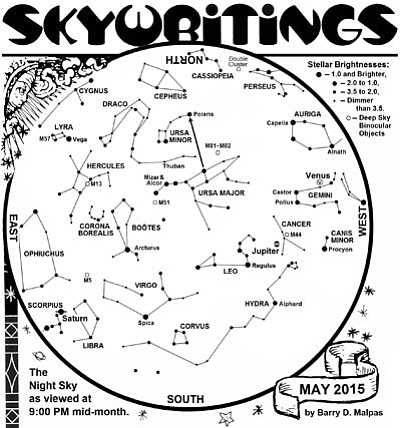 WILLIAMS, Ariz. - Visible light is a form of electro-magnetic energy that travels in waves to which our eyes are sensitive. Sunlight may look white. However, it is actually a combination of many colors which a prism can split into the spectrum of colors. This dispersion of hues can also be observed after a rain storm, when separate water droplets in the air act as cumulative prisms to refract the light, producing a rainbow.

At one end of the spectrum are the longer wavelength colors of red and orange, which gradually shade into the shorter wavelengths of yellow, green, blue and violet. The colors also have different frequencies and energies. The shortest wavelength in the visible spectrum, violet, has the highest frequency and energy, while red with the longest wavelength, has the lowest. Though the eye can neither detect ultra-violet (UV), which has a shorter wavelength and higher energy than violet, nor infrared radiation (IR) which has a lower energy and a longer wavelength than red, UV is responsible for sun burns, and IR is felt as heat.

Blue skies and red sunsets - Our atmosphere is a mixture of mostly nitrogen and oxygen gas molecules, water vapor, and lots and lots of dust. On a clear cloudless day the sky appears blue because the dust particles in the air have a tendency to scatter the sun's shorter wavelength blue light more than longer red wavelengths. When we look towards the sun at sunset, we see red and orange colors because the blue light has been scattered out and away from our line of sight. This effect is known as Tyndall Scattering, and is the reason we have blue skies and red sunsets.

So, why all the dust?

Besides wind storms, and man-made pollution from industrial manufacturing which adds to the mix with various gases, soot and other materials, there are also other natural phenomena that will produce dust in our atmosphere.

On June 12th, 1991, Mount Pinatubo, in the Philippians, erupted and ejected an estimated 20 million tons of particulate matter into the upper atmosphere. Over the following months, the aerosols formed a global layer of sulfuric acid haze, and global temperatures dropped by nearly a full degree Fahrenheit over the next three years. Unusually dark red sunsets were observed during the following decade world-wide.

Then there is stuff from outer space, or cosmic dust. This material is the leftovers from the formation of the sun and planets, debris from comets and asteroid collisions. It is estimated that about 200 tons of cosmic dust and meteoritic material enter Earth's atmosphere each day. On special occasions each year, it is more easily seen as Earth passes through the orbits of comets that have strewn a lot of dust and small bits behind them in their orbits over the millennia. We observe these as meteor showers, such as the Persieds and Leonids.

Cosmic origins - All original matter, including dust, began after the Big Bang when the universe was created. As everything expanded, gases and dust that were close to each other were attracted, and clumped together by the force of gravity to form galaxies, stars and planetary systems, comets and other celestial objects. Very large stars live a relatively short time and die in massive, cataclysmic explosions strewing even more dust throughout the universe. It is only in these Supernovae that the heavier elements (from iron and above on the periodic table) are created. The sun is a second or third generation star since these heavier elements exist in its upper atmosphere as well as on the Earth and the other planets.

It has been observed that organic molecules exist in the depths of space, protected from degrading x-rays and gamma rays by clumps of cosmic dust. These cosmic dust-organic mixtures, along with water from comets, have rained down on Earth over the vast reaches of time and may have introduced our planet to the very seeds of life. After all, the hemoglobin in our red blood cells, the oxygen transport system within our bodies, contains iron. We, and all living things, are, in part, the result of cosmic stuff. We are all made of star dust.

The Williams monthly Star Party - May 22

Members of the Coconino Astronomical Society, in conjunction with the City of Williams, will host a Star Gazing Party from 7:30 to 9:30 p.m. on Friday, May 22nd, at Glassburn Park, in the natural area west of Rod's Steakhouse parking lot. Several large telescopes will be on hand to view the moon, planets and other celestial objects. Organizers recommend bringing a folding chair, or blanket, and your own binoculars.