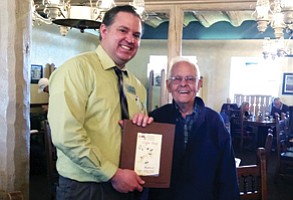 GRAND CANYON, Ariz. - In 1949 California resident Tom Hand was 20 years old and had picked up a friend in New Mexico before driving to the South Rim of the Grand Canyon where he found work in the kitchen of the historic Bright Angel Lodge.

Hand has only returned one time to the Canyon since 1949, on a quick drive by with his wife. This time he brought his family to share his memories and his story.

Hands' original journey to the Canyon was one of unexpected adventure and youthful enthusiasm.

"It must have been about 1948-1949, I drove from my home in California out to New Mexico to meet a friend of mine that was working on a ranch," he said. "He had quit there and he wanted to go to the Grand Canyon to apply for a job with the mules, taking the tourists down the trail. He rode with me in my 1950 two-door Dodge Sedan. It had recently snowed there (the South Rim), so it must have been around March but when we got there, there wasn't any openings for him with the mules."

While Rhodes was not able to get on with the mule train and ended up working as a ranch hand at a nearby cattle ranch, the Bright Angel Lodge hired Hand.

"I applied for a job and was hired as a dishwasher," Hand said.

He worked in the kitchen, first as a dishwasher for two weeks before the lodge's butcher asked him to be his assistant.

"I helped him do his work as a butcher," Hand said. "After about a month they wanted somebody to work out front where that shoeshine stand was and to help clean the men's and women's restrooms, so that was my job for at least a month."

After shining shoes and cleaning restrooms, the butcher asked Hand to go to Idaho with him.

"The butcher wanted to go to Idaho to apply for a job at a resort," he said. "He didn't have a car and I was footloose and fancy free so he came with me."

Before leaving Grand Canyon Hand made his first and last hike into the Canyon.

"The gentleman and his family were in my section and he was in the process of telling his story to them and brought me in on it," Noble said. "I told him I thought it was awesome and told my manager."

Hand said a lot has changed since his time at the Canyon, including the layout of the buildings.

"I tried to see where I stayed and I saw the mule barn and corral and I know the Bright Angel had a large, long building for the working people," Hand said. "I think I saw the building on our last trip here."

For Hand the Canyon and lodge he once called home have seen many changes over the years.

"It's totally improved everywhere," he said. "It's expanded so much - it is so modern."

Of all his experiences at the Canyon, Hand said being a butcher helper and shoeshine at the Lodge were some of his most memorable.

"Being a butcher helper was all new to me and then being a shoeshine - I never did that before," he said. "I learned to shine shoes and how to make that cloth snap."

In 1950, Hand was drafted into the U.S. Army to serve in the Korean War. He spent two years in the Army before using the G.I Bill to pay his way through college.

After receiving his teaching degree, he taught elementary school near Ventura, California. Hand and his wife now reside in Bakersfield, California.

Hand was happy to be able to return to the Canyon with his family and said the one thing that has not changed at the Canyon in the last 66 years was the Canyon itself.

"It is still just as grand and beautiful as it ever was," he said.