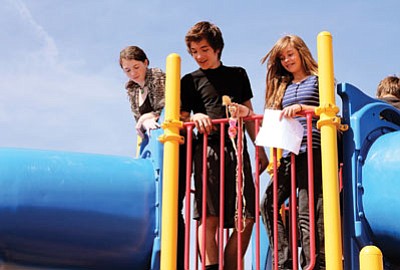 WILLIAMS, Ariz. - After bungee jumping Barbie's taught math and science lessons to middle school students at Williams Elementary-Middle School (WEMS) last week, those students have a new perspectives on how to apply math and science skills to real life scenarios.

"We are trying to combine math and science," said Williams Middle School math intervention teacher Dalton Jackson during last week's experiment. "They're getting 10 measurements of height and they're trying to predict how many rubber bands it will take to have Barbie bungee jump without hitting the ground but get as close as possible to the ground."

Students conducted the experiment at the school playground and enjoyed being outside while figuring out how far each Barbie doll could bungee jump.

"They had testing this week, so we are trying to do something fun outside, so they can be loud and still try to learn something," Jackson said.

Jackson coordinated the event with Williams Middle School science teacher Todd Gonzales hoping it would show students how a relationship between math and science works.

"This is something we decided (to do), because we thought math and science should have more of a bond/connection," Gonzales said. "Math is a language of nature so we wanted to show the kids, mostly, that math is a part of science and it could be fun."

All of the sixth, seventh and eighth grade classes participated in the experiment, which started as a class assignment.

Students were asked to predict how many rubber bands Barbie would need to safely bungee jump from different heights while getting as close to the ground as possible without actually hitting the ground.

In order to test their predictions, students chose various areas, with different heights, around the playground for Barbie to bungee jump from.

"So they can go to the top of the playground, the top of the monkey bars - they can even try shorter (distances) too," Gonzales said. "So it can be a meter in height, like as tall as the trash can - they're trying to apply it (the experiment) to all different types of heights."

Students were also asked to identify the relationship between the number of rubber bands and the jump distance.

"Our thought is that if they make one prediction they should be able to apply that to other heights," Jackson said. "Some of them are making some pretty good predictions, like it takes 18 rubber bands to go two and a half meters."

After Barbie had undergone as many bungee jumps as the student's needed in order to test their predictions, Jackson and Gonzales had each class graph the results and write down if their predictions were reliable and at what heights Barbie could safely jump from without hitting the ground.

"We are going to know if it was a nice predictable amount or if (the number of rubber bands) jumped and why it looked like it did," Jackson said. "I was way off, because I thought it would be linear - like this many rubber bands...but the further she falls the more rubber bands it takes."

In addition to getting students outside and participating in interactive experiments, Jackson said the in-class graphing and scientific prediction experiment helps students with their math and science skills.

"Graphing is always really tough for them," Jackson said. "Then the prediction is something Mr. Gonzales has been working with them all year."

Gonzales said he and Jackson coordinate these types of experiments with the hope that students walk away with a new perspective of science and math class.

"A lot of the perceptions of math is that it is not fun, it's boring - so if they can see that they can do experiments that are fun by making measurements and trying to make predictions, then math can be fun," Gonzales said. "(We want to) get rid of that perception of math."