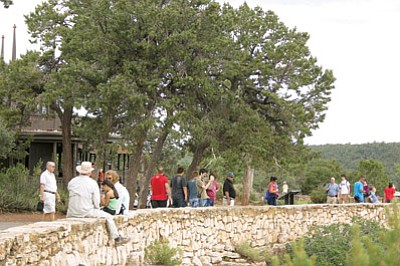 The spending from tourism supported 13,359 jobs and benefited the state economy in over $1.25 billion.

This increase totals an 8.1 percent increase in spending and 6.4 percent rise in visitation over 2013.

"From Grand Canyon to Tumacácori National Historic Park, the national parks of Arizona attract more than 10.7 million visitors a year from across the country and around the world," said Sue Masica, director of the NPS Intermountain Region. "Park visitors come for a great experience - and they end up spending a little money along the way. This new report confirms that national park tourism is a significant driver in the national economy, returning $10 for every $1 America invests in the National Park Service. This reality makes national parks tourism a big factor in Arizona's economy, too. It's a result we all can support."

Total spending by visitors to Arizona's 20 national parks ranked fifth highest among the 50 states and overall visitation was sixth highest.

Nationally, the report shows that a record 292.8 million park visitors directly spent $15.7 billion in communities within 60 miles of a national park. This spending supported 277,000 jobs: 235,600 of those jobs were in the gateway communities near the parks. The cumulative benefit to the U.S. economy was $29.7 billion.

According to the 2014 report, most park visitor spending was for lodging (30.6 percent). Other major categories include food and beverages (20.3 percent), gas and oil (11.9 percent), admissions and fees (10.2 percent) and souvenirs and other expenses (9.9 percent).

More information about the national parks of Arizona and how the National Park Service works with communities in the state to help preserve local history, conserve the environment and provide outdoor recreation can be found at www.nps.gov/arizona.