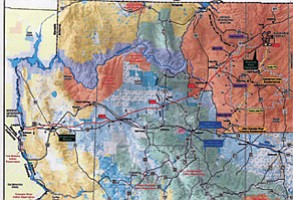 Stilo is looking into using the Black Mesa Pipeline, once used to transport coal slurry to the Mohave Generating Station, as a possible water source. Photo/U.S. Department of Interior

TUSAYAN, Ariz. - With close to 375 acres of land proposed for future commercial and residential development, many people are wondering where Stilo Development will be getting their water.

According to Stilo representative Andy Jacobs, Stilo is currently reviewing several alternatives to the water issue: ground water, which could include drilling wells on the Stilo properties, water delivery by train or truck and piping water in using the abandoned Black Mesa Pipeline.

While digging wells on their properties is not Stilo's ideal solution, they said it has not been ruled out completly.

"It's certainly an alternative, not a desired alternative that we are focusing on," De Paulo said. "That's what everyone up here does now."

Stilo stated they would like to try find an alternative to using ground water since it is a highly controversial issue and could mean facing future lawsuits. However, it has not been officially ruled out.

"If you take water out of the ground it's affecting something," De Paulo said. "It's interesting how there's never a focus on other people's water activities. We haven't done a thing, we haven't drilled a well."

Bringing water in by rail is an option that Stilo originally looked at when they initially began planning the developments.

"There are two possibilities that we had looked at and had secured," De Paolo said. "We had Central Arizona Project (CAP) water and contracts with the railroad. You can either come up from Phoenix, through Paulden to Williams or you can come in from Topock (west, below Kingman)."

De Paulo said brining water by rail is still a viable option and the land exchange in 2000 contemplated water being hauled by train.

As far as the amount of water that would need to be hauled, De Paulo said recycling the water was an option.

He compared the process to other areas like the Catalina Islands, Scottsdale, Arizona and the space station which use recycled water in their infrastructures.

"It's not like they send up a tanker truck," he said. "Once you fill the jar, so to speak, if you use water correctly, you're not adding to it other than through water harvesting or small supplements. The point being, once you energized the storage, the number of trucks hauling water or trains, the amount of supplemental water required is pretty small."

Trucking water into the development is another option Stilo is considering.

"There are properties in Tusayan that have their water hauled by truck everyday," De Paulo said. "That's without using water harvesting for supplement or recovering water and recharging it and using it."

While De Paulo believes water hauled by train or truck could supply the development, he believes it could be a little short sighted in fulfilling only Stilo's needs. He stated Stilo would like to help with water issues in the surrounding areas, including the national park and Tusayan.

"This is the one that can probably do the most for the most people," De Paulo said. "It can address the park's issue, it could address Tusayan's issue, Williams' issue - it goes all the way up to Kayenta and ultimately you could be dealing with Cameron, Tuba City, Moenkopi."

The 273-mile Black Mesa Pipeline once joined the Mohave Generating Station in Laughlin, Nevada with the Black Mesa Coal Mine in Kayenta, Arizona.

The 18-inch diameter pipline was used to transport coal slurry (coal dust in water) from water pumped out of the Navajo Aquifer. Peabody Energy used the slurry pipeline to pump its coal to the Mohave Generating Station where it was filtered and used to generate power.

The Mohave Generating Station was shut down in 2005 partly because of controversy over the company's use of a potable water source to transport coal in the pipeline.

Stilo said it has been encouraged to believe its plan to transport water in the deserted pipline will work, but the process is still a long way out.

"We have spent a lot of time and energy trying to see if that alternative (works). We know economically it works," De Paulo said. "There are some legal challenges and other things but certainly one that we're hopeful materializes into something more than just a concept."

Water transported in the Black Mesa Pipeline could come from the Colorado River around Laughlin, Nevada.