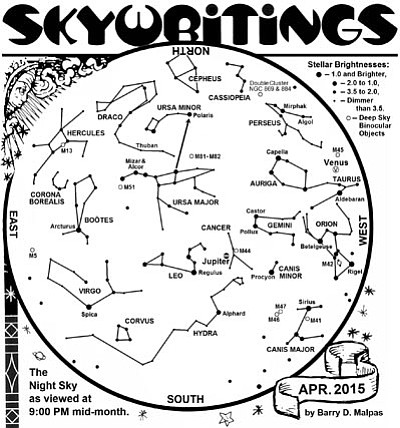 WILLIAMS, Ariz. - That extremely bright object currently found in the southwestern sky after sunset, often referred to as the evening star, is the planet Venus.

This so-called "twin" of Earth is only so in relative size, being about 82 percent of the mass of the Earth. Because it is one of just two planets closer to the sun than Earth, when observed through a telescope, Venus presents a variety of phases as it revolves around the Sun, similar to those of the Moon. Galileo, in the early 1600s, was the first to observe these phases through his telescope. Their discovery illustrated that not everything revolved around the Earth, which reinforced the Copernican Sun-centered model of the universe, as opposed to the ancient Earth-centered model that had been supported since antiquity and by the Church.

Early Europeans were not the only people interested in Venus. Many references can be found in early Chinese and Egyptian writings, as well as the early Puebloan peoples of the American southwest who recorded its periodic nature incorporating it into their respective cultures and religions. The Dresden Codex, one of only three existing books of the Mayans, which describes their ideas about the universe, contains extremely accurate calculated tables of both solar and lunar timings as well as those for the risings and settings of Venus, which was of great astrological significance in their culture.

With the advent of the telescope during the 17th through 19th centuries in Europe and America, charting the surfaces and atmospheres of the planets was a prime scientific study for astronomers. However, the surface of Venus eluded even the largest of Earth based instruments due to its beautiful, but almost completely white reflecting clouds.

At one time people theorized that Venus might be a tropical paradise. It was only in the 1960s when radio mapping and other techniques were developed that were capable of penetrating the atmosphere, that scientists were able to send orbiting spacecraft, enabling us to map the planets' surface and measure the environment. What was found was a very inhospitable world of extreme temperatures and hostile climate.

It takes 243 Earth days for Venus to rotate once on its axis compared to Earths' 24 hours. Since the planet's orbit around the Sun takes 225 Earth days, its day is longer than its year. Because Venus does not tilt on its axis, there are also no seasonal variations.

The dense atmosphere of around 95 percent carbon dioxide traps heat and causes a greenhouse effect literally making Venus the hottest planet in our solar system with an average surface temperature of 462°C (864°F), hot enough to easily melt lead. And those beautiful dense clouds that surround the planet are comprised of water vapor and sulfuric acid. The atmospheric pressure at the surface of Venus is 92 times greater than the Earth's. This pressure, if felt by a human, would be equivalent to that experienced at a depth of about a half-mile beneath the oceans on Earth.

Though beautiful and interesting to observe through a telescope, Venus is one of the least likely members of the solar system that might ever be colonized by humans in the future.

On Saturday morning, April 4 there will be a total eclipse of the full moon observable from Arizona. Its totality phase will be the shortest of the 21st century lasting only five minutes. The Moon will be located low in the west before sunrise to the right of the bright star Spica. Partial phase begins at 3:16 a.m. as the Moon passes into the Earth's shadow. Total phase occurs between 4:58 and 5:03 a.m.