The 'bear' necessities: new cubs at Bearizona sleep and eat their way into visitors' hearts 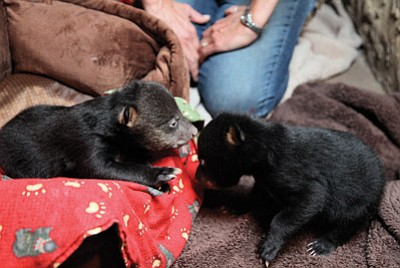 New bear cubs at Bearizona spend a little time wrestling before going back to sleep. New cubs sleep as many as 20 hours per day. Ryan Williams/WGCN

WILLIAMS, Ariz. - Baby bears and baby humans are a lot alike in some ways: they cry when they're hungry, spend a lot of time sleeping, and need some help when it comes to potty training.

But unlike their human counterparts, bear cubs are usually born in litters of two to four, have a sixty percent cub mortality rate, and can grow up to weigh as much as 600 pounds.

Bearizona Wildlife Park in Williams recently welcomed three black bear cubs - Klondike, Kaptain and Blue. Staff is caring for the six- to seven-week-old cubs until they are big enough to live in their own enclosure in May.

Bearizona Keeper Laura Leinaar believes the three cubs have different mothers, but isn't sure since several female bears were sharing a den when the cubs were born.

At this stage of their lives, the cubs sleep for about 20 hours per day and eat 15 percent of their body weight daily. Their diet consists of a milk replacer that is specially formulated for black bear cubs.

"Usually the only time they're awake is when you wake them up to feed, so that's why as soon as they wake up they have that instinct of 'I need to eat,'" Leinaar explained as the cubs squealed for some food.

Black bears cubs are all born in January, with the adults having mated the previous spring.

The bears give birth in the winter during hibernation. According to Leinaar, bears can enter different degrees of hibernation depending on the geography of their habitat and the severity of the winter. Arizona has a stable wild population of black bears in the wild, however the elusive animals are rarely seen. Since Williams has relatively mild winters, Bearizona's bears don't enter full hibernation mode.

"They're in a hibernative state but they're not necessarily knocked out for six months," Leinaar said. "They know they're getting fed at Bearizona, so they never really go into that six-month disappearance act. They have their babies when they're denned up and they're basically hibernating, so they're not using any calories, and that's one way they have calories for cubs, is they use less calories by not moving."

Once the cubs are born, Bearizona staff brings them to their own enclosure to ensure their safety. In the wild, only about four out of 10 bears live through their first year.

"The male bears try to kill them because it sends the mama back into heat," Leinaar said.

In their natural habitat, the mother bears lick their cubs and teach them how to go to the bathroom. At Bearizona, staff rubs the cubs' bellies to help them learn.

"As they get bigger and get onto solids, they'll learn the sensation and start dragging themselves and grow into going potty on their own," Leinaar said.

Keepers also have to mimic the cubs' natural environment when it comes to regulating their body temperature. Since the cubs are only born with a light fuzz instead of the thick fur the adult bears have, they need heating pads to keep them warm at Bearizona.

"In the wild, mama's got her arm around them," Leinaar said. "The mamas sleep with them against their side. That's what gives them their body heat."

As a form of comfort, Leinaar said the bear cubs often chew on each other's ears "like a baby with a binky and they purr." The bears do this until they're three years old, when they are considered mature.

In the coming weeks, the bear cubs will grow exponentially. At birth, they weigh between eight and 16 ounces.

"They're like a Twinkie," Leinaar said. "In another two weeks you won't even recognize them. They're going to be so much bigger."

Although Bearizona practices birth control with its bear population, a few cubs are usually born each year.

"We're here to mostly educate," Leinaar said. "We're not here to blow out the walls with as many bears as we can get. We always hope for two or three. It's a really good connection for people emotionally to see a cub. That's where you start your education."

"The connections people make between our animal residents and the habitats in which they reside are key to understanding and conserving wildlife," she said. "We have a unique opportunity to educate the public about what it means to live with and recreate among black bears, and these little ambassador cubs are where it all begins."