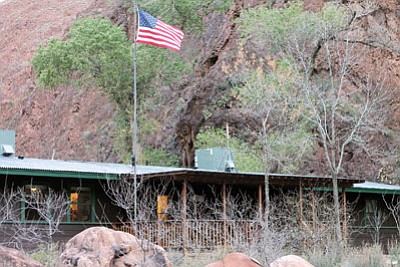 GRAND CANYON, Ariz. - Phantom Ranch provides respite for weary travelers to the bottom of the Grand Canyon and it is where Mandi Toy calls home.

Phantom Ranch is around 14 miles from the North Rim, 10 miles on the Bright Angel trailhead and seven from the South Kaibab trail.

Every eight days Toy hikes in and out of the Canyon, where she spends her time at Phantom Ranch working as an interpretive ranger.

Having grown up in the suburbs of Los Angeles, California, moving to Arizona to live and breathe the remote and sometimes desolate air of the Grand Canyon was not exactly at the top of Toy's list of dream jobs.

"I'm from Southern California and never really visited national parks," Toy said. "I'm not one of those people who knew she wanted to be a park ranger from the time she was five years old. I kind of fell into all this by accident."

Toy grew up in Upland, California and went to college in Santa Cruz, majoring in American Studies. After graduation she was at a loss - unsure what direction her life should take.

"When I was out of college I didn't know what I was going to do with myself," she said.

No longer wanting to live in Southern California, Toy moved north to San Francisco. Her degree was not specific to one field and did not provide an open door for employment options.

"It (American Studies) basically covers trying to define what an American is and what that idea is," Toy said. "That can be cultural studies, there can be political issues, gender issues - I focused on Bonnie and Clyde."

Part of Toy's undergraduate requirements was writing a thesis - she wrote on the media's image surrounding the controversial life of Bonnie Parker.

"I was really into that whole gangster thing," Toy said, which may have helped Toy in her next career decision.

"I saw an internship on Alcatraz Island and I thought, 'Hey, that looks interesting,'" she said.

Hoping for a chance to live for free in the city and to overcome her fear of public speaking while spending her days talking about gangsters, Toy applied.

She landed an internship and was later hired as an emergency hired park ranger. She also worked for several years with Alcatraz's cooperating non-profit association, The Golden Gate National Parks Conservancy, as an interpreter.

Her three-month internship turned into four years of working on the island - where she quickly got over her fear of public speaking.

"I was terrified," Toy said about public speaking. "But there you greet a boat every 30 minutes and over 300 people walk off the boat. You either get over it really fast or move on."

In 2004 Toy quit the prison and moved to Italy where she spent three months in Florence learning Italian.

Toy moved back to San Francisco where she worked as a tour guide and later a campus tour manager for the Academy of Art University.

Despite being in the city she loved, Toy still yearned for more and missed her job with the Park Service.

"I felt like things were boring, I was stagnant in San Francisco," Toy said. "Something's got to change and I really wanted to go back to the Park Service."

Toy decided to apply to any national park where she could see herself living for one year.

She specifically wanted a permanent position but otherwise did not care what the job was.

"It didn't matter what the job was, as long as I could get my permanent Park Service status," she said.

Since Toy had decided to devote up to one year to the park, she ended up moving from fee collector to visitor center guide. Her first year at the Canyon was not ideal however, and Toy still wasn't happy with her life on the Rim.

"All that time that I worked at the front gate, I hated it here," she said. "I was miserable. I was having such a hard time adjusting from being in an urban area to coming here."

Toy was not adjusting to her new life - until she started hiking.

"Once I started hiking to Phantom it all changed," Toy said. "It is a whole different world below the Rim. I saw more beauty in it and it was challenging and just a really interesting place to be."

This year marks Toy's eighth year hiking in and out of the Canyon. She is one of two interpretive rangers assigned to Phantom Ranch.

For Toy life below the rim is spent at Phantom Ranch where she hikes in on day one and hikes out on day eight. When she reaches the rim she has six days off.

"For me this building (Phantom Ranch Ranger Station) is not just another government building, it is my home," she said.

Toy shares one of the bedrooms at the ranger station and a house on the Rim with her replacement, Interpretive Ranger Emily Davis. During their nine-month season in the Canyon, Toy and Davis only see each other in passing on the trail.

For convenience and the opportunity to see Davis, Toy mainly hikes the South Kaibab trail. After eight years she has become an efficient packer, not taking anything but the necessities - any food needed at the ranch is packed in by mules.

"It becomes your commute," she said. "I just get in my zone."

When she reaches Phantom Ranch, Toy will spend her mornings posting weather updates and notices and working in the office. Afer a break in the afternoon, she works an evening shift, presenting ranger talks.

Each evening at 4 and 7:30 p.m. Toy delivers talks about subjects she is interested in.

"I'm a story teller, I tend to focus on history a lot more than say geology or wildlife," she said. "I do a geology talk, you can't not talk about geology in Grand Canyon but when I'm looking for new programs a lot of them are more historical figures and their stories."

For now Toy said she has adjusted to her life below the Rim and over time has found peace in her life.

"The difference now is I have the same calming feeling in the city and at Grand Canyon," she said. "I always tell people who are really focused on their phones and they don't know what to do because they don't get a signal, 'you are going to miss it, you've got to just look around. You never know what you're going to see.'"

Currently Toy's permanent-subject to furlough position at the ranch - allows her to work nine months out of the year as Phantom Ranch's interpretive ranger.