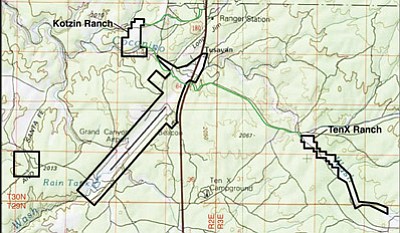 TUSAYAN, Ariz. - On March 10 the Flagstaff City Council passed a resolution opposing the application to the U.S. Forest Service from the town of Tusayan for road easements to Kotzin Ranch and Ten X properties - proposed future development sites by Stilo Development Group USA in Tusayan.

The resolution was a response to a request from concerned citizens and business owners during a council work session Feb. 24.

Representing some businesses of the Greater Flagstaff Chamber of Commerce was government affairs director Stuart McDaniel.

"In favor of the businesses here in Flagstaff, at the end of the day we are going to be fighting for Flagstaff and those businesses here," McDaniel said. "What's at hand right now is tourism which is critical to Flagstaff. Our hoteliers and our restaurateurs, our businesses here - we are the gateway to the Grand Canyon."

The resolution opposed the easement and stated "the Forest Service's approval of a right-of-way easement to facilitate massive new Tusayan development that will be harmful to the Grand Canyon National Park and the city of Flagstaff tourism industry."

"I think the time is now to be clear about our concerns with this issue," Councilwoman Coral Evans said. "I think the city of Flagstaff and the hoteliers have been very clear for decades now with their concerns for this issue."

The resolution passed in a 5-2 vote with Mayor Jerry Nabours and Councilman Scott Overton voting against it.

Stilo Development Group stated its presence at the meeting could have cleared up many questions asked by council members, Flagstaff residents and business owners.

"It was clear to me that there was not a lot of knowledge prior to the council's vote on this resolution on what is actually encompassed in this development," said Stilo representative Andy Jacobs. "It was disappointing that a city council would approve a resolution that they clearly had a lot of questions about and would not even invite the developer to answer those questions."

The town of Tusayan also stated they were not invited or informed of the council's impending discussion and vote on the resolution.

"It was very disappointing that they did not advise us in advance and give us the courtesy of notification so we could have attended and given a more accurate portrayal of what is taking place," Tusayan Mayor Greg Bryan said. "We think they have the wrong impression of what we are doing and why we are doing it."

Stilo and Tusayan responded to the council's decision after the meeting.

"I've let him (Flagstaff city manager) know that Stilo is open to meeting with any council member who may have any issues or concerns or things that they would like to discuss with Stilo," Jacobs said. "At this point we are open to whatever Flagstaff wants to do. We would at least explain what our vision is and the fact that we believe that development in Tusayan will not hurt Flagstaff, it could actually help Flagstaff by improving the visitor experience for northern Arizona as a whole."

Bryan stated Tusayan would be happy to share reasons why the town is involved in the development and said competition is a normal development in every town.

"Competition is healthy and we believe that (within) another municipality, it is not our right or business to interfere with economic development in those communities," Bryan said. "Our goal has always been affordable housing and getting our residents the quality of life that people in other towns and communities take for granted."

According to Bryan, economic benefit to Tusayan is only a bonus for the town. One of the driving factors in the town's decision to support the development is the housing opportunity it provides Tusayan.

"The economic development is an additional benefit to the community," he said.

The town of Tusayan thought the resolution was an unprecedented action by Flagstaff's City Council, according to Bryan and voiced disappointment in the absence of a previously forged relationship with the city of Flagstaff.

Bryan said Tusayan was and is still open to sharing information with the Flagstaff council.

"Had we been asked, we would have been more than happy to come and share it (reasons for the development) and we still are," Bryan said. "Simply out of courtesy, if they have an interest but we are not in any need to get their permission."

Forest supervisor Mike Williams presented Flagstaff council members information regarding the scoping process the Forest Service will use in the analysis.

"We received the application, we've agreed to consider it (and) we've processed a cost recovery agreement," Williams said. "As part of the application process, there's an environmental analysis that's required. I'll eventually make the decision around whether or not to grant the easement but not until the analysis is complete."

Williams said the Forest Service is hopeful to have the analysis completed by April, which would be followed by a 30-day public comment period. Depending on the extent of comments and controversy surrounding the easement, the process could take longer.

"Easements are not typically a complicated thing to consider," Williams said. "I think you are all aware of the controversy surrounding the private land development there in Tusayan right now and I do not know how long this is going to take."