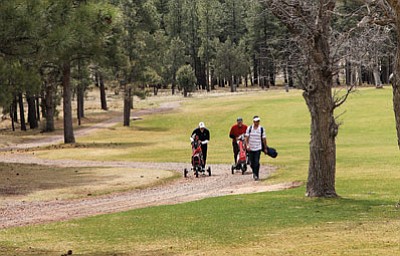 Above: Rick Shipley putts for par on the 16th green of Elephant Rocks Golf Course in Williams. Below: Members of the Men’s Club head to the next hole. Elephant Rocks opened its first nine holes on March 14 and the second nine on March 18. Ryan Williams/WGCN

WILLIAMS, Ariz. - After a short delay because of a late winter snowstorm, Elephant Rocks Golf Course now has all 18 holes open for play.

The course was originally scheduled to open on March 4, but Mother Nature had other plans. Williams received 14 inches of snow over a four-day period between Feb. 28 and March 3.

Although the snow delayed the course opening, Golf Course Manager Scott Little said it did help the course conditions.

"A little extra moisture is always good on a golf course," Little said.

After waiting for the snow to melt, the course opened the "old" nine holes on March 14. On opening day, 27 golfers took to the course. The second nine holes opened on March 18.

"We have all 18 open and looking good," Little said.

Little started managing Elephant Rocks before the start of the 2013 season. The course saw its best year for total revenue on record in 2014.

This year, Little hopes to keep that momentum going, although he said it depends on whether Williams has favorable golf weather.

"There's no reason it shouldn't be as good this year as it was last year," he said.

Little said he wants to keep people coming back to Elephant Rocks based on the positive experiences they have at the course.

"My main goal is to create a customer base through customer service, so continue to treat people that come here really well and maintain repeat play," he said.

So far this season, Little already has three new season pass holders. He hopes to either meet or exceed the amount of pass holders the course had last year.

"There's a good group of regulars that will always buy the season pass, but this year I have good early signs that we'll have even more," he said. "I've already sold a few memberships to some Flagstaff customers that like making the drive."

In early April, the golf course will begin offering a limited restaurant menu of hotdogs and sandwiches. In early May, the full-service restaurant will be open for business.

Besides the golf revenue, Little hopes to book about 10 weddings at Elephant Rocks this year, and five are already scheduled.