Bill Williams Mountain Men: now and then
Group formed in 1953 rides from Williams to Cave Creek to keep traditions of west alive 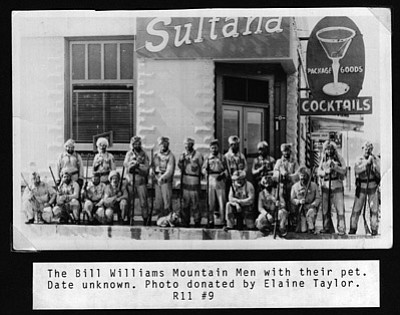 The Mountain Men circa 1955 with their mountain lion mascot Tuffy. Williams Public Library

WILLIAMS, Ariz. - Sleeping under the stars, waking up before daylight, and spending the day riding horseback through the countryside is just a day in the life of the Bill Williams Mountain Men.

The group formed in Williams in 1953. According to member Seth Staples, "the main mission and purpose of the mountain men is just to promote Arizona and also just that pioneer heritage that made our state great."

Each year since 1954, the Mountain Men have made a one-week 200-mile pilgrimage from Williams to the Phoenix area by horse or mule. This year, the Mountain Men left Williams for their Rendezvous Ride on March 14 and returned March 22.

The tradition has endured for more than 60 years because the group's values haven't changed since its inception.

"They really try to hold on to that pioneer spirit and pioneer heritage and just the history of northern Arizona, and I think it's getting harder and harder to see those values that were really prevalent in our society not too long ago," Staples said. "I'm one of the youngest members of the group. We know some guys who have lived in that time period. Hard work and telling the truth, those are all important things. They're just things I think we've kind of gotten away from and those are the things that, when I say pioneer spirit, I think that's what we're talking about."

In 1953, a group of local businessmen gathered at Diz's Tavern in downtown Williams and formed the illustrious Bill Williams Mountain Men with the goal of promoting the town.

They adapted their name from the 1800s-era William Sherley Williams, a hunter, scout and the town's namesake, who was known as Old Bill.

"See, our town is named after an old mountain man, Bill Williams, so it was a natural name for the club when they started and a natural thing for them to start with," said longtime member Bob Dean. "The mountain men, they explored a lot of the west trapping beaver for hats in France."

The mountain men are easily recognizable today, since they still wear what their forefathers wore: buck skins and hats made from skunks, foxes, coyotes, and bobcats.

The March 18, 1954 edition of the Williams News reported the following about the Bill Williams Mountain Men's first Rendezvous Ride, which would become an annual tradition:

"Thirteen Bill Williams Mountain Men, saddle weary but triumphant, rode into the Fairgrounds at Phoenix 3 p.m. Wednesday and notified Dr. J. A. Stewart of their safe arrival after their 185 mile trek from Williams. The bearded Mountain men, in buckskins and carrying their heavy old-fashioned rifles and powderhorns, are honor guests of the Phoenix Jaycees Rodeo, which opens today.

"Only casualty on the trip was Ray V. Stewart, who was bucked off his horse twice before leaving the vicinity of Williams. He injured the finger of his left hand, but went to the hospital, had it patched up and went along on the ride...

"Dr. J. A. Stewart kept in touch with the Mountain men by short wave radio all through their ride...

"On the rough trail near Perkinsville the chuck wagon acquired two flat tires, but new ones were secured in time for the cavalcade to continue on schedule.

In their earlier days, the group traveled annually to Phoenix to participate in the annual Jaycee's Rodeo. In recent years, including this one, the trip has been made to the area northeast of Phoenix, where the group participates in the Cave Creek Rodeo and parade.

The Bill Williams Mountain Men have been invited to participate in five different presidential inauguration parades - the most memorable of which was the inauguration of John F. Kennedy in 1961.

Over the years, the Mountain Men have had two mountain lion mascots, Tuffy and Tuffy II. Rancher George McNelly, who ran across the mountain lions on his land, reportedly took in both cats. Tuffy II made the train journey to John F. Kennedy's inauguration in 1961with the group.

Several governors have named the Bill Williams Mountain Men Official Arizona Ambassadors. The Mountain Men are also listed as a local legacy in the Library of Congress.

Besides appearing in parades and other special events, the mountain men also visit hospitals, nursing homes and schools. In addition, they raise money to give scholarships to local high school students.

"We try to raise money for different functions in town here," said Butch Johnston, the current president of the Bill Williams Mountain Men. "We support the community. Whoever we feel is in need we try to help."

While mountain man membership was originally restricted to Williams residents, it is now open to all Arizona residents. Prospective members must complete a Rendezvous Ride before they can join the club.

The mountain man tradition spans generations. Williams resident Bob Dean has been a member of the Bill Williams Mountain Men for 50 years. Dean's father Denton "Diz" Dean was one of the founding members of the group, and Bob joined in February of 1965.

While Dean took a year off from doing the ride horseback this year to serve as the beer truck driver, he plans to do another ride with his son and grandson in the coming years.

Life on the trail

The journey from Williams to Cave Creek is about 200 miles and takes between six to eight days to complete, depending on that year's route.

Staples served as the trail boss for this year's Rendezvous Ride. His responsibility was to create this year's route, including alternatives for if the weather was bad.

"The best part is spending the whole year exploring new country and trying to find a different route than the previous year - getting permission from ranchers, finding ways through canyons or ways to get through fences, finding a gate, those types of things - that's kind of the fun part," he said. "It's a lot of time on my mule, that's for sure."

Before leaving on the ride, the mountain men have to make extensive preparations, such as finding a cook and camp help. About five vehicles meet up with the riders along the way, helping to carry the food for the riders and horses, the bedrolls and other gear.

The riders start conditioning for their annual Rendezvous Ride a couple of months before the weeklong trip.

"It takes a lot of preriding to get your horse ready and yourself ready for the ride," Dean said. "You've got to be in shape. It's not an easy ride by any means."

Even with the pre-ride conditioning, the journey is still tough, according to Johnston.

"The first two days are a bear... because you're not used to riding 30-35 miles in one day," Johnston said. "After a couple of days it's not quite as bad, but you have to get your animals legged up where they can handle it. It's a lot of fun after the first two days."

During the trip, riders wake up well before daylight, between 4:30 and 5 a.m. The first order of business is starting a fire to warm up the riders. After that, it's breakfast time for both the horses and the mountain men.

The humans eat a hearty breakfast on the trail as well, such as biscuits and gravy, eggs and bacon. Then everyone packs up their gear, saddles up and starts on the next leg of their trip between 7:30 and 8 a.m.

Throughout the day, the beer truck will meet the riders on the trail and provide them with beer, soda, water, snacks and candy.

"The fun part is seeing new country that a lot of guys just haven't seen before, little secret canyons or secret trails that the trail boss found," Staples said.

In the evenings, the riders settle into their campsite by feeding and watering the horses, eating dinner, and telling stories around the "BS" campfire.

"Since all the old timers are out there, they talk about the old times and how Williams and Arizona used to be and how much has changed," Staples said. "My favorite part is actually just sleeping out underneath the stars, just being tired from the day and full from that dinner and just being able to sleep 20 feet from my mule. That's what I like the most."

"Of course we've probably got a little better bed rolls than they had then," he said. "I know I do."

Although membership has declined in recent years because some of the older members have passed away, the Bill Williams Mountain Men are still going strong because of one major factor: the bonds the members form while on the trail.

"It's a lot of camaraderie and getting everybody together at one time," Johnston said of the group. "It's not for everybody of course. But we're trying to keep the west alive, you know? It's just a lot of fun."