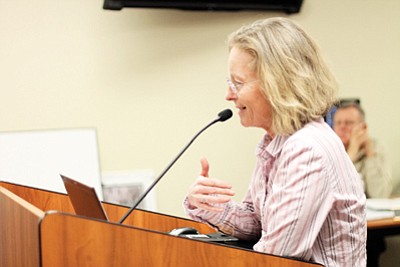 Councilman Bill Fitzgerald asked Burke about the effect the designation of the national monument would have on both Grand Canyon National Park and Tusayan. Fitzgerald asked if the proposal addressed who would be responsible for the management of the monument and if it would affect Tusayan's water supply.

"The national park started out as a national monument and then became a national park so it's already got a higher level of protection - that management responsibility would not transfer between agencies," Burke said. "It (the monument) would be primarily managed by the Forest Service. It does not really have any effect on that, (the town's well and water rights). What we're looking at in terms of protecting the watershed is preventing uranium contamination through the uranium mining withdrawal. That's where the watershed part really comes into play."

Water contamination caused by uranium mining is one of the top concerns for designating the area as a national monument, according to www.grandcanyonwildlands.org.

If the area was designated a national monument, it would help prevent the problems caused by uranium mining.

"National monument designation would also permanently protect the area and its waters from additional damaging uranium mining. In an area where communities are already living with the toxic legacy of uranium mining, the health effects, water contamination and expensive clean up accompanying plans for new mines cannot be ignored," the GCWC website stated.

If approved, 1.7 million acres will be preserved as a national monument. Five areas that will be covered in the monument include the Kaibab plateau, the Kaibab-Paunsagunt wildlife corridor, Kanab Creek watershed, House Rock Valley and the South Rim headwaters. These areas encompass a large portion of the watershed from the Colorado River and would encompass approximately 7,000 acres of privately owned land and would contain roughly 300,000 acres of 'ancient tree' or 'old-growth' forest, according to GCWC.

Included in the proposed acreage are some of the areas where uranium withdrawal parcels are located - south of the Grand Canyon and west of Kanab Creek.

However, the designation of the monument would allow for the continuation of existing mines.

Other concerns council members voiced included the effects of flights into Tusayan and the impacts to grazing rights in the area.

According to Burke, the soundscape around the Canyon and town are not currently in the proposal and GCWC is not against all grazing rights, only the impacts of inappropriate grazing.

"Overall I think it's raising the bar in protecting what would eventually be identified as monument objects, so very specific in terms of - is something going to affect those monument objects in a negative way," she said. "What we're looking at is the opportunity, if people are voluntarily interested in giving up a grazing lease, that they would have an avenue to do that and it would be permanent."

According to Burke the monument would allow continued access for both hunting and grazing.

"Monument designation does not change those things that already exist," she said.

Additionally, some of the areas included in the proposed 1.7 million acres overlay into the Tusayan Ranger District and the Kaibab National Forest.

According to council members, this could impact future development and growth in the area.

"We have a good share of the Tusayan Ranger District within the town limits, how does that overlay impact uses or change in uses of acquisition of Forest Service land that the town may want to do down the road?" asked Tusayan Mayor Greg Bryan.

Burke stated that she was uncertain what the impacts would be for the town and the issue would need to be discussed further.

"As I understand it the Forest Service lands are what are considered in the monument proposal, but if there is some issue here then that's probably something that we all need to talk about," she said.

GCWC and other environmental groups, including the Wilderness Society, the Sierra Club and the Center for Biological Diversity, have joined together to support the proposal, with the goal being to help make the uranium withdrawal permanent, protect and restore old growth forests and protect wildlife corridors and important archaeological and cultural sites.

According to Burke they seek to raise support and awareness of the proposal's objectives by reaching out to communities, local governments and surrounding tribes.

In January the coalition gained support when Arizona Representatives Raul Grijalva, Ann Kirkpatrick and Ruben Gallego sent a letter to President Obama voicing their support of the designation. The representatives' letter addressed the natural and economic importance of the watershed and the challenges the areas face from uranium mining and logging.

Opponents of the designation of the monument include U.S. Senators John McCain (R-AZ) and Jeff Flake (R-AZ), who sent a letter on March 10 to the president urging him not to make an executive decision on the proposal.

In their letter they stated the proposal for the watershed was not the intent of the 1906 Antiquities Act. The act allows the president to designate historic, landmarks, structures, and other historical or scientifically significant areas as national monuments.

"This proposal extends far a-field from the intent of the Antiquities Act by seeking to lock away 1.7 million acres of land in Arizona - an area larger than the state of Delaware - from hunting, livestock, wildfire prevention, mining, and certain forms of outdoor recreation and tourism," the letter stated. "The greatest threat to the watershed of the Grand Canyon is the ongoing 15-year drought in the Southwest."

McCain and Flake stated the designation of a new monument (Arizona currently has five national monuments, encompassing 1,983,301 acres) could "worsen watershed health if land managers and private property owners are restricted from thinning the area's overgrown forests or if hunters are barred from culling overpopulated wildlife. Arizona cannot afford to have its hands tied when it comes to controlling wildlife populations, enhancing its water supplies, and preventing wildfires."

Bryan's concern about the monument are unclear future consequences of the designation and the impact on Tusayan.

"This could impact, significantly, our community as well as the enjoyment of good bits of land," he said. "We have challenges with federal government already not being able to care for and protection of our parks and monuments."