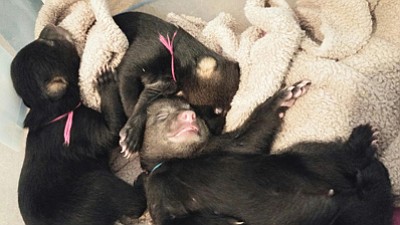 Bearizona Wildlife Park recently announced the arrival of three North American bear cubs, which were born in early January at the Williams, Arizona Wildlife Park. The bear cubs can be seen in a special care area of the park until May when they will then be big enough to go out into their own enclosure within the walk through portions of the park. Black Bears commonly have two to four cubs per litter and can nurse up to six cubs. Despite high birthrates, only four out of ten cubs will reach their first year of life. The sixty percent of cub mortality is a result of starvation and depredation by male bears and other large carnivores.