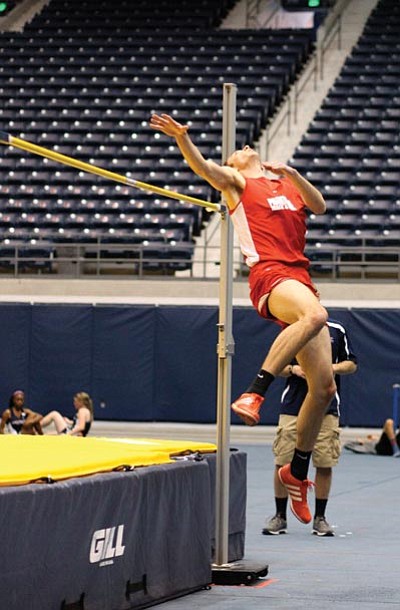 Tyler Jones springs from the NAU Skydome floor in Flagstaff for his high jump. Ryan Williams/WGCN

Jones said he has not practiced very much so far this year, but with the little practice he has had this season, the senior hopes to make state again.

"Get first again, (I was) third for the state championship," Jones said. "I haven't (had) a lot of practice. A little bit - not a lot really."

Cly said he found the 1,600 more challenging than 800 and was hoping to improve over the season.

"I run everyday, I usually run for 45 minutes to an hour," he said. "I'm hoping that my times get better - I'm just looking for improvement."

Assistant track coach Monica Nanacasia is hopeful that Cly and Jones will both make it to state this year.

"Jones went to state last year and we have Julian - this is his first year here, but he ran before, down south, so we are hoping he can go to state for long distance running," she said.

Savannah Perkins and Josefina Legaspi ran the 800-meter. Perkins finished with a 2:57:63 seconds time and Legaspi with a 3:12:31 seconds.

Each leg of the relay was one and one-third lap of the track. The first exchange was at the finish line, second at the 200/800 start and third at the 400-meter point.

As a freshman, this is Nanacasia's first time competing in track and field. She signed up for shot put and to run relay.

Nanacasia was excited for her first meet and said the track students had been practicing in various methods.

"We've been practicing with each other but the distance runners, they would go run around the Canyon," she said. "For the high jump they would set up the jump and just do that and the shot put people would just practice that, but the relays for the girls, we just all practice it."

After not finding a track coach for the team this year, GCS Administrator Javier Abrego stepped in to fill the position. Monica Nanacasia, Elna Perkins and Bently Monk will aid him.

The Phantom track team is made up of eight students and competes in Division IV.

The Phantoms have six scheduled meets this year - the school's athletic director and administration decide which meets students will compete throughout the season.

The Phantoms track team heads to Goodyear on Friday, March 27 for their next meet.