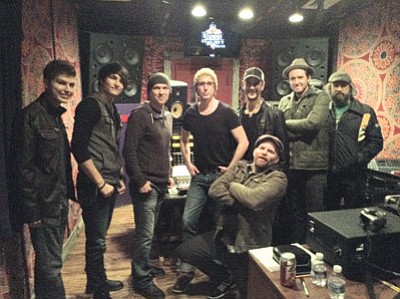 After about five years of playing together as a family, this is the group's first time in the studio. The Beavers are hard at work hoping to finish their album in late April. Last week, the band members took a break from recording to answer some questions about their experience so far.

How did you come up with the name of the band?

Lance: We lived on the corner of Sheridan and Slagel on a hill, and Sheridan Hill sounded much better than Slagel Hill. Now it reminds us of home.

Lance: It's been a huge blessing to watch the boys develop their talents, and so much fun to play together.

Dylan: Because we already know each other, I think it makes the process easier.

Dakota: I really enjoy it. I always thought it was a good way to keep humble, because there's always a family member nearby to give you a good whack when you step out of line (laughs).

What are your impressions of Nashville?

Lance: It's a beautiful area, with great people and hopefully lots of opportunity

Dylan: The people are great, and downtown Nashville is awesome with all of the old churches and buildings.

Dakota: There are always surprises, you never know who you're going to see. Just recently we walked out of this pizza place on Broadway, and saw Luke Bryan sitting in the front of his tour bus.

You mentioned you've written six songs while in Tennessee. Can you describe the songwriting process and talk a little bit about what the songs are about?

Lance: Well, I always give God the credit for the songs, and that hasn't changed. We are blessed to be working with a producer/artist development person named Sal Oliveri who has been a huge help. He has really helped us focus on the type of music we need to be writing in order to create the greatest buzz. That being said, our goal is the same, in that we want our music to reflect our values.

Who are some of your biggest musical influences?

Lance: We listen to a lot of music, so our influences are pretty diverse. For me, George Strait and Chris Daughtry.

Dylan: As a mandolin player, I would have to say Chris Thile, Artists that I like would include Maroon 5, Pharrell Williams, and Keith Urban.

Dakota: A group I've really enjoyed since their debut is the Band Perry, and Dierks Bentley is always good. In other genres, I like Norah Jones and MAGIC! has just come out with a great sound.

Lance: We are actually still in the thick of it. The House of Blues is a great place to record, and we are grateful to be there.

Dylan: This is my first time and the studio musicians have been fantastic to work with, and listening to them play has been an amazing experience.

Dakota: Well, I got free chips...ha ha. Thanks to Sal, it's been a really great time. He's been great at making our first attempt at recording painless, and I am thankful for the blessing.

Lance: This is the beginning of the process for us, and we are so excited to be here pursuing a dream. We really believe God has brought us here for a purpose, and we're just trying to work as hard as we can to see it happen.