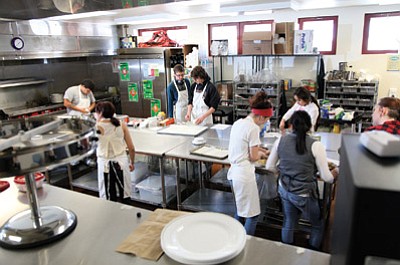 WILLIAMS, Ariz. - Cooks scramble around the kitchen, searching for ingredients, gathering pots and pans, chopping, measuring and mixing to prepare the different parts of a meal. But this isn't a restaurant kitchen, it's the culinary arts classroom at Williams High School.

"It's just almost everything that has to do with foods," said teacher Jeanne Gillespie. "It's just basically trying to get them in the kitchen working together."

Gillespie has been teaching culinary arts in Williams for more than 20 years. Before that, she taught the home economics class, which included sewing, housing and child development in addition to food preparation.

As junior Brooke O'Leary chopped almonds for the almond roca, she said she decided to take the class because it's more hands on and provides real-world skills.

Meanwhile, senior Ramon Hernandez melted chocolate and shortening for the brownies. He said while he already knew some cooking basics before taking the class, he's learned more about cooking safety from Gillespie.

"You have to have your pan handle off to the side instead of having it out like this so it doesn't spill," he said.

While sophomore Kenne Hoag worked on the lasagna, he said he feels at home in the school's kitchen.

"Back here just feels right," he said. "I've learned about all the different knives, that you have to keep your area clean and all that, and how much work actually goes into cooking."

Besides learning valuable life skills in the culinary arts class, students can also earn college credit through Coconino Community College. If students dual enroll for the class, they can earn six credits in the Hotel and Restaurant Management program. The students also leave the class with a food manager's card, which is one step above a food handler's card.

The culinary arts room includes a cafeteria and a licensed kitchen so students can work in an authentic environment. The Arizona School Facilities Board built the classroom in 2004. Prior to that, Gillespie was working out of a classroom with four makeshift cooking units. The new kitchen has commercial appliances, plenty of counter space, a walk in storage area, a laundry room, and a dish room.

"It was designed for the students' use in here," she said. "It's been really good getting to learn to work on commercial equipment and everything."

Although the board retreat is behind them, students are now preparing for their next challenge in April: preparing 15 meals and snacks over three days for the district's AdvancEd accreditation external review team.

The menu will include taco soup, chili rellenos and lasagna rolls, Philly beef stuffed sandwiches, ham and cheese stromboli and wraps. The students will break into three different groups, so they all get a chance to prepare breakfast, lunch, dinner and snacks.

After that, the semester will culminate with a final exam in which the students invite community members to have one of four meals that they prepare, plate and serve.

Although these meals require a lot of work, the students approach the challenges with enthusiasm.

"Actually I was trying to get them to do the accreditation thing as their final exam, and they said, 'No we want to do this other one." Gillespie said.

As Hoag said of the culinary arts coursework, "It's fun to do."