Uranium mine outside Tusayan to re-open, lawsuit to move forward 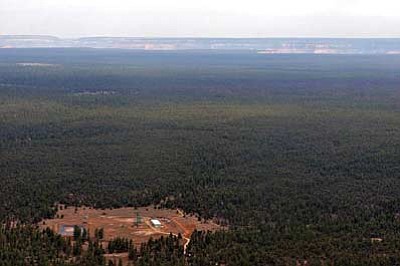 The Canyon uranium mine is around six miles from the south rim of Grand Canyon. Photo/Bruce Gordon, Ecoflight.

GRAND CANYON, Ariz. - Because of falling uranium prices and lawsuits from environmental groups and the Havasupai tribe, in 2012 Energy Fuels Inc. stopped operations at Canyon Mine. Within the next year, the operators plan to re-open the mine and commence operations.

A recently passed 20-year ban on new uranium mining claims in the Grand Canyon area does not effect pre-existing mines, which allows Canyon Mine to re-open.

"The 20-year mineral withdrawal that we worked on to get enacted in 2012 does not apply to mines with valid pre-existing rights," said Grand Canyon Trust (GCT) program director Roger Clark. "If that (mine) occurred or was established before the withdrawal then those mines are exempt."

In 2012, the Trust was one of several groups that filed a lawsuit against the U.S. Forest Service opposing the opening of the mine.

According to Clark the original statement was completed in 1986. Now the group is requesting that the environmental statement be revised. The plaintiffs in the case would like an updated statement to include several key changes - changes Clark said are based on new information and recent research.

"They have another big issue because Red Butte is a sacred area to them," Clark said. "It's an area that is a large area around the butte, including where the mine is, which is part of their legal claim against its re-opening."

Hypothetically, Clark said the tribe could ask for a road to be built around Red Butte rather than allowing access to the mine from the existing road located along the northern area by Red Butte.

In 2013 Energy Fuels Inc., one of the largest uranium producers for the United States and operator of Canyon Mine, told GCT they would close Canyon Mine for a period of time if the Trust would put the lawsuit on hold.

Clark believes one of the decisions for this holdover was partly based on a drop in the price of uranium.

Uranium is priced per pound of 'yellow cake' (the first milled product of uranium ore). In 2013 the price was down to $30 per pound - a very low price on the market. In February 2015 yellow cake had risen to almost $40 per pound.

"They're improving, they're still not very good," said Energy Fuels spokesperson Curtis Moore about uranium prices. "They have improved quite a bit over the last six to eight months."

In addition to a price hike on uranium, Energy Fuels recently purchased 50 percent of Wate Mine from Vane Minerals. The Wate uranium project is located in northern Arizona and like Canyon Mine, is a "breccia pipe" deposit.

"Breccia pipe" uranium deposits are considered to be one of the highest-grade deposits not only in the U.S. but also around the world, outside of Canada.

Because of their high grades, the deposits are considered low cost sources for Energy Fuels.

According to Energy Fuels and a 2012 Technical Report prepared in accordance with National Instrument 43-101, Canyon Mine deposits have 1.63 million pounds of uranium contained in 83,000 tons of Inferred Mineral Resources.

To complete the mine, between 1,200 and 1,500 feet of shaft will need to be sunk, two ventilation shafts will also need to be sunk and the underground development needs to be completed.

Moore said Energy Fuels would like to commence operations at the mine within the next several months. Sinking the shaft and completing the mine's development could take up to a year to complete.

"It's a little bit of a moving target but I think you can count on late to second quarter or early third quarter (anytime between May and August) would be reasonable," Moore said. "What we're going to be doing is resuming developments, there won't be any ore production happening this year. The remaining development that needs to happen is shaft sinking."

According to Energy Fuels, Canyon Mine and other similar deposits will have minimal environmental impacts that affect around a 20-acre area.

Clark said the Trust is concerned about the use of dry shafts. According to Clark even if the company claims the shafts are dry, there is a certain amount of water that seeps through to underground aquifers.

Any water seepage into the shafts is supposed to be pumped out, preventing any risk of water coming into contact with uranium ore and moving into lower layers to aquifers.

One of the aquifers is the Red Wall Muave aquifer, which supplies Tusayan, the Grand Canyon, the Havasupai and other areas with drinking water.

"The Forest Service signed off on this (Canyon Mine) back in 1986 and we're arguing that they need to go back and re-do the permit," Clark said. "At minimum - require ground water monitoring."

Ground water monitoring requires miners to drill monitoring wells up and down stream of the mine in order for the water to be tested for contamination.

In addition to the lawsuit, the Forest Service and Energy Fuels face opposition from the town of Tusayan.

In 2013, Tusayan sent a letter to the Arizona State Land Department stating the town's opposition to uranium mining in the area.

The town cited safety, groundwater impacts and use, impacts on the neighboring tribal lands and risks versus benefits of mining as their primary concerns.

"From an economic point of view, the town doesn't receive much, if any, benefit in terms of taxes or liability," Tusayan mayor Greg Bryan said. "Historically there's been minimal input or sales generated from a retail point of view for us. Our concerns would be that of environmental impacts and all the issues of water contamination as well as transportation and handling of the product."

One of those concerns is the increased traffic from transportation of the uranium will create along Highway 64.

"I think it's a dangerous situation in that it's already a very dangerous road," Bryan said.

"The width and size of it and the speeds that are generated and the significant level of vehicles that are out there. Add another commercial vehicle out there with length and size and now we're going to add a component that could certainly increase the accident rate."

The ore taken from Canyon Mine will go to a processing plant in southeastern Utah and be shipped to companies in the U.S. and other parts of the world.

"We have three customers, two are U.S. utilities and one is a South Korea facility," Moore said. "The majority of our uranium is sold within the United States and is used for utilities that have nuclear power plants, which is by far the best way that we have to use emission free/carbon free electricity in the U.S."

While the mine continues to prepare to re-open, the lawsuit against the Forest Service is proceeding. A request recently sent to a federal judge in Phoenix asked for the group to proceed with oral arguments in their case.

"We have already submitted our written briefs - to do our oral arguments (next) and get a decision from him before they're allowed to re-open," Clark said. "We've got a court date to do the oral arguments on Wednesday, March 18."