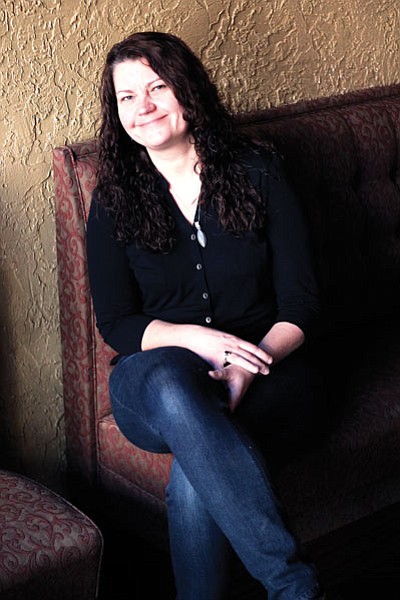 GRAND CANYON, Ariz. - Jessica Pope is an interpretive ranger and administrative assistant on the North Rim of Grand Canyon National Park - with passion in her soul and a deep understanding of humanity she's more than just your average ranger.

"My story is actually very different than most folks," Pope said.

By the time Pope become an interpretive ranger on the North Rim, she was 44, had already had two careers and was retired.

Pope's first career was working for the American Heart Association in Phoenix followed by a move to Flagstaff, where she used her education in public health to become a director at a rape crisis center in Flagstaff. After working under the pressures and intensity of the crisis center for more than twelve years, Pope decided she needed a change.

"The Northern Arizona Center against Sexual Assault was out of North Country Health Care Center and victims of sexual assault would be brought to us by members of law enforcement," she said. "It was a really intense job and at that time, when I was working that job, my youngest daughter came of age and moved out and I continued to work for another year. But I started to question whether I could really keep up with everything and I decided to leave and I did what you're not supposed to do."

'What you're not supposed to do' included cashing out her retirement fund early and going on a road trip across two countries.

"I attached a 1968 single axle trailer to the back of my truck and I drove up to Alaska and back," she said. "I spent four months just going everywhere - all over the west and Canada and Alaska."

When Pope returned to Flagstaff, she knew she wanted to stay but had no idea what she wanted to do next. Leaning on experiences from her trip and watching a Ken Burn's PBS documentary series on national parks, Pope discovered what that next step would be.

"When I was on that trip I went to every national park I could. I had a ball and one day when I got home, I was watching these (PBS) films and it just dawns on me - 'I want to do that, I want to be a ranger,'" she said.

Specifically Pope wanted to be an interpretive ranger - she wanted to communicate with the public using her skills and her love for public speaking. First, she had to figure out how to work the government's website and run its search engines, in order to apply for the correct position.

By January of 2010 Pope had applied to over 54 different national parks. She ended up with three interviews - Black Canyon of the Gunnison National Park in Colorado, Sitka National Historic Park in Alaska and the North Rim at Grand Canyon National Park.

Pope took the job at Grand Canon's North Rim and in April of 2010 started her first season as a park ranger and a new career.

"When I got up there for my first season, I thought 'You know this will be a fun thing to do for a year or two and then I'll go back and find a grown up job again,'" Pope said. "At the end of my first season I was hooked."

Pope fell in love with her new career, deciding she had found what she wanted to do for the rest of her life. She realized her new job helped fulfill a humanitarian effort desire and gave her experiences in public health a new meaning.

"I've always been motivated by public health and community health and trying to make things better for people and it took me no time at all to realize the best thing that can happen to an individual is to reconnect to the natural world," she said. "As a park ranger I get to be there every day and I see that and I get to facilitate those connections."

According to Pope, working on the North Rim is a treat and is one of the reasons Pope enjoys her job. Her location on the North Rim and the remoteness of that location allows her unique connection with her co-workers and visitors to the park.

"We are very remote, the closest grocery store is 85 miles away," she said. "When you live in a park you're a very small community and yet we have thousands of people who are moving through every day. The core of us that actually live there are a pretty small, tight community."

Living in a remote area has taught Pope to plan ahead and how different the North Rim is from the South Rim. According to Pope there is no comparing the North and South Rim, as both are 'world's apart.'

"When I visit the South Rim and get back on the North Rim, I feel like I'm in a national park," she said. "The South Rim has a grocery store, they have a bank and it feels like you're going to town."

One of the main benefits of her position on the North Rim is the amount of time she is able to spend interacting with park visitors.

"On the North Rim I can be roving the rim trail and encounter a family and I can stand there and talk to them for 10 to 15 minutes," she said. "So you really get to have some quality experiences with people."

Interpretive rangers have similar responsibilities as those on the South Rim, including facilitating ranger talks and scheduling programs. North Rim ranger talks range from geology, history and archeology to ecology and nature at the Canyon. Seven programs are planned throughout the North Rim's season and Pope gives talks for each. One of her specialties is a new evening program that discusses water resources on the Colorado River.

From Pope's daily interactions with the public and her keen perspective of humanity she views national, state and historic parks as both necessary and instrumental in healing.

"They're not just niceties, they are necessary. People need this to be healthy and well and I'm so grateful that we have them," she said.

For those interested in becoming a ranger, Pope suggests getting a degree in a relevant field and go for it.

"I always tell people that the only limitations are the ones you create between your ears. If you decide you can't do something, you're right - you can't. You have to work hard, it's not easy," Pope said. "If you're just coming out of college, I think you'd better have a degree in Natural Resources. For me I had a lot of background in community organizing, public speaking and designing outreach programs. It was really easy to retool and take all those skills and say 'Now I'm going to talk about condors and geology.'"

Interpretation from Desert View, a closer look at a ranger's life along the Watchtower
Interpreting the Canyon through the eyes of a ranger
Life below the Rim, an interpretive ranger's life at Phantom Ranch
From big city to big canyon, ranger takes on dream job
Faces at the Grand Canyon: Interpretive Park Guide Kristi Rugg
Event Calendar