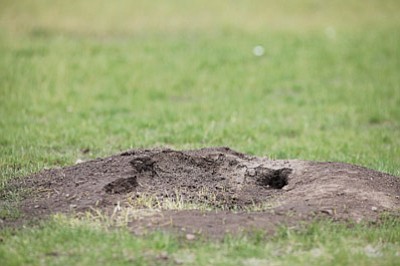 One of the many prairie dog burrows at Williams Elementary-Middle School. Ryan Williams/WGCN

WILLIAMS, Ariz. - A colony of prairie dogs has taken over much of the outdoor space around Williams Elementary-Middle School (WEMS) causing safety concerns.

But Arizona Fish and Game (AZFG) and the Forest Service (USFS) hope a new effort to trap prairie dogs at WEMS could solve the problem once and for all.

AZFG Wildlife Manager and Biologist Mike Rice told the Williams Unified School District (WUSD) Governing Board June 24 that AZFG officers and the USFS will begin trapping and relocating prairie dogs on the WEMS grounds during the first two weeks of August.

They also recommend that the WUSD School Board consider a follow-up lethal treatment for any remaining animals.

"That has to be the end step or the problem will not be solved," Rice said.

AZFG and USFS can take care of the trapping and relocating, but Rice informed the board that any lethal removal must be decided and completed by WUSD.

"As the state biologist in charge of this area, what I can do is give you a recommendation on how to take care of them," Rice said. "We're going to trap the first two weeks of August and after that trapping effort has concluded the population will be at its lowest level. At that point, as a professional biologist, my recommendation to you is lethal removal of what is left on the school grounds."

Rice said he presented the idea to the board so members can begin making a plan. He said he believes it is going to take lethal removal efforts to completely take care of the problem and that the best option for the least mortalities will be a treatment after the trapping.

"I'm here as a first discussion," Rice said. "I know there have been several lethal removal efforts in the past and there will be some negative feelings in the community."

Board President Herman Nixon said although there are some in the community who are opposed to the lethal removal of the prairie dogs, there are many who are in favor of it. It comes down to safety.

"We've had kids break ankles, and all kinds of injuries over there," Nixon said.

Board members were concerned about the timing of the trapping, but Rice said the August dates were the only dates available for them to trap.

"I understand this isn't the best timing," Rice said. "But we're trying to do a long term solution right now so next year we aren't even having this discussion."

Nixon and board members decided to discuss the options over the next few weeks with Rice, Wygal and WUSD Maintenance Supervisor Angel Rico and then take action at the next governing board meeting.

Ever since WEMS was built in the 1970s, the district has struggled with controlling the prairie dog population on school grounds.

In 2011, the Forest Service relocated 125 prairie dogs from the school property to a location on the forest. The next year they relocated another 260.

WEMS football coach Tad Wygal attended the meeting and said the prairie dogs have always come back, and he now believes there are more than there have ever been.

In 2013, following the recommendation of AZFD, the school purchased a $5,000 prairie dog fence that encloses the school property to prevent any more prairie dogs from coming in. The fence includes a metal mesh attached to corrugated metal that is buried four to six feet underground.

After the barrier fence was completed in 2014, the plan was for either AZFG or Forest Service officials to trap the remaining prairie dogs within the enclosure and then relocate them. However, the agencies told the district that because of other commitments, they wouldn't be able to take any action for at least a year.

In August of last year, some people took on the prairie dog population themselves by shooting them with pellet guns. Neither school officials nor the police chief knew who was hunting the prairie dogs.

Rice said Game and Fish and the Forest Service can now put a concentrated effort into trapping as many prairie dogs as possible on the school grounds during the two-week period in August.

"We are doing prairie dog testing north of town so we have the resources, the man power and the traps," Rice said. "We're basically at the next step in the process now."

Rice said a pre-baiting period would take place and then trapping would begin. They will set 300 traps per day during the trapping period and relocate the animals to a USFS area north of Parks.

In the last few years, prairie dogs have bitten or scratched as many as seven students and have been found inside the school. Additionally, in 2013 two football players were injured after falling because of the animals' holes. One player fractured his ankle and the other broke his leg

"Although some years we gain on it, this year we are not gaining at all," Wygal said. "The holes are bigger. I counted 50 heads at one time just on the football field."

According to the Fish and Wildlife Service, prairie dogs are one of several rodents that carry the plague (Yersinia pestis). When plague spills over into a prairie dog population, it can spread quickly because of the social nature of the animals.

In September 2014, the county found fleas in Doney Park, Flagstaff prairie dog burrow that tested positive for the plague, and in 2007 Biologist Eric York contracted the plague and died following a necropsy on a mountain lion at the Grand Canyon.

According to the Center for Disease Control (CDC), in 1996 an 18-year old Flagstaff resident died of the plague as the result of bites by infected fleas while walking through a prairie dog colony in Navajo County.

Although the plague can be fatal, the infection is curable with antibiotics. Symptoms include fever, chills, headache, weakness, muscle pain and swollen lymph glands.

Health District Staff stated the disease can be transmitted to humans and other animals by the bite of an infected flea or by direct contact with an infected animal. They suggest not handling sick or dead animals and to avoid rodent burrows. They also say that infected fleas can transfer from rodents to domestic animals, especially cats. They recommend not camping next to rodent burrows and avoiding sleeping directly on the ground.