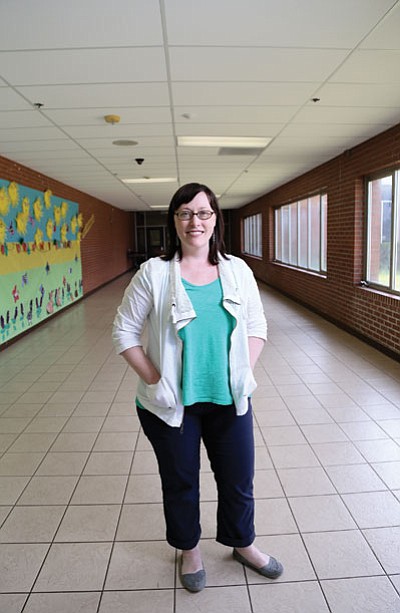 Morrison lives in Parks, Arizona and most recently worked at Seligman Unified School District as a principal intern and 8-12 grade English teacher from 2009-2015.

Earlier this year she completed her Doctor of Education from Arizona State University and received her principal certification while interning for current Seligman Principal Jeff Baker.

Even though the majority of Morrison's teaching has been at the 8-12 grade, she said her experience at that level helped her get hired as the new WEMS principal.

"I think one of the goals in the outgoing administration was to increase the rigor in the middle school and my background with those ages helped me in that respect," Morrison said. "I also think (the school board) saw that the experience I had with curriculum and instruction could help the middle school get stronger as well as have a trickle down effect to the younger ages."

Morrison said she is eager to meet parents and members of the community. She was heavily involved in the Seligman community and is looking forward to getting to know people in Williams.

"While I'm officially a doctor now I still really like to have an open and informal relationship with parents," she said.

"WUSD has been so welcoming to us and everyone seems really positive and excited," Morrison said.

Morrison believes that it's important for staff, students, parents and other community members to join together for school success. While working as an English teacher in Seligman, she was also part of the leadership team, which was a collaborative team made up of the superintendent, principal, teachers and certified staff.

"They were an underperforming school when I started there in the 2009-2010 school year, and the high school moved up to an 'A' school in 2013," Morrison said.

"WUSD may have done it here in the past, I'm looking into it," Morrison said. "I would love to bring it back in the future. It's really about everyone being on the same page about the school culture and behavior of students. It's very explicit about what the high expectations are and incentivizing that behavior and recognizing it. And really having consistent consequences when students are unable to meet that, and then providing support so that they can meet that."

Morrison believes it is helpful to bring in as many certified and classified staff who want to be involved.

"I can't do anything but (involve others), I'm not a top down type of person," Morrison said. "Obviously there are things that need to be decided, but for those things that are going to impact teachers and students on a daily basis, I think the more involvement that they have the more successful we're going to be as a school."

Morrison did not plan to get involved with administration when she began teaching. She said she loves language and believes in the power of the spoken and written word, which led her to become an English teacher.

"But seeing some of the great transformation we saw in Seligman and seeing how it could maybe even been developed more, encouraged me to want to go back (to school)," Morrison said. "You definitely have a scope of influence in the classroom because you're working directly with students, but then when you think about positively impacting teachers and then they're positively impacting students, you just want to be part of something bigger."