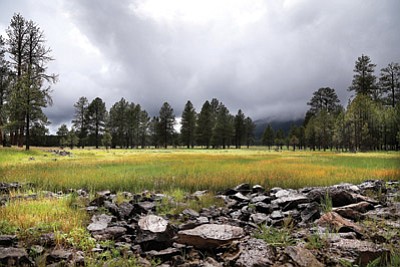 WILLIAMS, Ariz. - According to Kaibab Forest Fuels Specialist Drew Leiendecker, May 2015 has been the wettest May in 20 years for most of the Kaibab, but managers are still wary.

"We're seeing similar moisture patterns to 2010," Leiendecker said. "And on June 16, 2010 the Eagle Rock Wildfire was started by lightning on the North Side of Sitgreaves Mountain and burned 3,474 acres before it could be suppressed."

Leiendecker said that fine dead fuels like pine needles and twigs rapidly become saturated with precipitation, but when the sun comes out they can dry out quickly. The moisture in these dead fuels can change within just a few hours. If these fine dead fuels catch fire, they could quickly ignite the drought deprived live fuels.

"The moisture we have received this spring has been consistent and frequent enough to keep our fine dead fuels wet, limiting the potential for a fire to ignite or spread," Leiendecker said. "However, the fine fuels respond quickly to changes in the environment."

The live fuels - such as standing ponderosa pines are much more complex. The increase in seasonal moisture does not necessarily equal increase moisture in the live fuels because of the "phenology" or life cycle of various trees and shrubs. Timing and amount can have big impacts as to whether or not the live fuels respond. The cumulative drought along with fluctuating weather patterns outside of the historical has impacted dead and live fuels on the Kaibab in various ways.

"So far we have not seen the live fuels respond positively to this year's moisture despite having the second wettest monsoon in the past 20 years last year, and above average moisture to this point," Leiendecker said. "Our early June samples are showing ponderosa pine is at about the 90th percentile and close to our 20 year low for this time of year."

"So that means if you take that 13 years, only 10 percent of the days have seen days that are lower values than they are now...it's very dry," Banks said.

The accumulated moisture in the heavier dead fuels (larger branches and logs) has been beneficial though. With only a few weeks left until monsoon season, those heavier dead fuels will most likely not dry out completely. This will help reduce the available fuels for wildfires.

"So we're thrilled with the moisture that we see," Banks said, "But we recognize that doesn't mean we're in the clear of the fire season or fire danger."

Leiendecker said the strange pattern of moisture and cumulative drought seen over the past 10 years has allowed the live fuel moisture to recover less and less every year and the forest continues to see dry values on those live fuels. The frequent moisture helps prevent fire starts in the dead fuels, but the drought impacted live fuels still allow for hot and potentially catastrophic fires.

Forest managers just completed 339 acres of prescribed burning around the base of Kendrick Mountain. The Forest Service plans to burn an additional 2,000 acres around the same area. This area has been treated before and managers think the current conditions should produce no problems. However if there are several days of dry weather, the plans to move forward could change.

Once the monsoons begin, managers will look at opportunities to manage natural ignitions from lightning. Each of these wildfires will be evaluated based on public and firefighter safety, location, fuel conditions and the likelihood that the fire will produce desirable effects.

Last year firefighters were able to manage over 28,000 acres of wildfire on the Kaibab for resource benefits and hope to have opportunities to do more of the same this year.

On the Kaibab, about 70 percent of forest fires are lightning caused, which means 30 percent are still human caused.

Forest managers want to remind visitors to practice good campfire etiquette, by keeping fires in rings and in open areas void of fuels. Even if it is raining, campfires need to be drowned and stirred until it is cool to the touch. Improperly extinguished campfires can hold heat and embers for several days until surrounding fuels could dry out enough to be receptive to embers blown by the wind.

"It is June and fire season on the Kaibab," Leiendecker said. "We still have the potential for a large wildfire on the Kaibab that would produce undesirable effects before the monsoons."