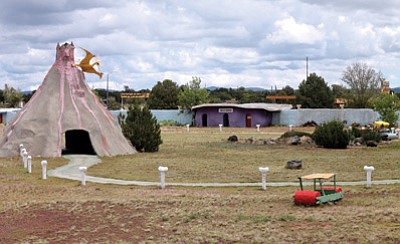 VALLE, Ariz. - One of Arizona's most unique theme parks is turning over a new rock. Linda Speckles owner of Bedrock City, a life-size replica of 1960s television show "The Flintstones," is looking to sell the family owned park after more than 40 years of operation.

Bedrock City has been an established part of Valle, Arizona for the last 43 years and has been for sale for several years. While Speckles sees the park's location as a major selling point, it has not sold.

Recent interest by the media in the park, has once again peeked interest in the property - although Speckles said she is not sure how or why the media picked up the story.

"I have no idea where this all came from," she said. "I don't know but it's quite interesting and quite a phenomena."

Bedrock City offers a variety of amenities, including a gift shop, restaurant, RV park, campground and convenience store along with other unique features that can only be found at Bedrock City...including the Stoneheads General Store, Bedrock City Post Office, Bedrock City, jail, Bedrock City Fire Department and Rockhead Beauty Salon.

True to its name, Bedrock City is a larger than life theme park and is conveniently located 30 miles from the gates of the Grand Canyon National Park.

The business was constructed by the Speckles and opened its doors in the 1970s.

"It's been a family operation, my husband was a contractor, he was the builder at Bedrock City," Speckles said. "We have had this property since 1972 - 43 years."

The Bedrock City family tradition started in South Dakota when Speckle's father-in-law built a similar theme park in 1966. Although the properties are no longer associated, both parks have remained open.

"My father-in-law was one of the originators of Bedrock City, with other people who were involved in the family operation there - we are not currently involved," Speckles said. "It was, of course, based off "The Flintstones" from television in the early '60s."

In addition to the walk through theme park, the property offers a campground, restaurant, gift shop and theater along with the Flintstone train ride, giant dinosaur slide, miniature volcano and molded statues of characters from the show.

Since her husband's death, Speckles and one of her five daughters have kept the park in operation.

"My youngest daughter and I have been operating it since my husband passed away," Speckles said. "Also I've had other daughters involved over the years too."

Speckles currently lives on the property and said she plans to stay in the area, partially to use it as a home base, if the property sells.

"I will be in the area, but I also want to travel," she said. "I want to see this beautiful United States that we are in. There are so many places that I would like to re-visit - so many things I want to explore."

"The economy has improved greatly, the gas prices have gone down and people's moods are so much better. So this is the perfect time to motivate myself to put it up for sale," she said. "I'm at the age where I think there is not going to be a lot more years to be able to enjoy. I think it's time for me to pass this property on to somebody else."

This property is for sale for the price of $2 million and according to Speckles, there are parties interested in purchasing the property.

"The location is very important, there are five million people who visit the Grand Canyon annually and a large amount go past this junction of Highway 64 and 180," she said. "It's a beautiful area, the climate is great and there is a lot to do and see."

As interest increases in the property Speckles hopes visitors will take the time to stop by and visit the park, she believes there is still time to enjoy the simpler lives of the Flintstone charactes. From Fred's favorite foods that can be found at the diner to going down the Brontosauraus slide in the park itself.

"The best part is to see the tourist who come through who enjoy seeing the uniqueness of Bedrock City and have kids have such a great time," Speckles said. "It's fun for all ages, big kids and little kids."

Throughout the year the theme park employees around 25 employees, eight to 10 during the slower off-season and 15 during the months of May through October.

Letter to the editor: Bedrock City up for auction
Yabba Dabba Doo - Flintstones Bedrock City to be bird park
Bedrock City: a world of its own
Yabba-Dabba-Done: Fred, Wilma and the gang bid farewell as Bedrock City closes after 47 years
Flintstone's-themed attraction, Bedrock City, reopens for one last summer hurrah
Event Calendar