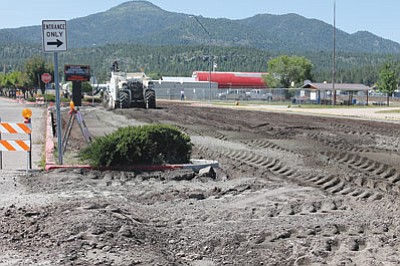 WILLIAMS, Ariz. - Williams Elementary-Middle School will have a new parking lot and new theater seats by the time students return to school in August.

The district had been saving money over the past few years to put towards the roof deterioration at the middle school and high school. When the state of Arizona School Facilities Board gave Williams Unified School District (WUSD) two building grants in 2011-2012, it allowed the schools to use the saved money toward other projects.

"In the past we had some bad facility problems, such as leaking roofs, etcetera," said WUSD Business Manager Melissa Ellico. "The past administration was trying to save up money for those when the state came in and fixed those. It freed us up to do some of the items at the schools that had been neglected."

The old elementary-middle school parking lot had weeds, potholes and places without any pavement. The lot has now been scraped and repacked and new pavement will be going in this week. The old bus lane has also been removed and widened. Parents can now use this as a student drop-off/pick-up lane and can easily exit the parking lot without waiting for the car in front to move.

Since the paving crew was fully mobilized for the parking lot, the district decided to also repave the school's basketball court. The new court will have asphalt with a resurfacing agent on it that can be painted.

"The asphalt courts were also highly deteriorated," Ellico said. "We wanted to repair that area since it is one of the only smooth playing places we have outside. It gives students a place to go when there is snow or mud on the ground."

The project will cost the district about $260,000. That includes paving the parking lot, the basketball court, the bus lane and the loading dock. It will also cover new curbing throughout the lot. Ellico said the work should be completed by early next week. The district plans to begin work on repaving the high school parking lot next summer.

Also on the district's facility improvement list for this summer is the replacement of the elementary-middle school theatre seats. The current seats were installed in the early 1970s. The school is waiting for the new seats to be manufactured and hopes they will be installed before school begins in the fall.

Other summer projects include completing the work on the Williams High School locker rooms. The boy's locker room remodel was completed last year and the girl's locker room is currently under construction. Both locker rooms will have new showers, flooring, fixtures and lighting. Each will also have new sensor faucets to help reduce water usage.

The district is saving money by using the school staff on the locker room remodel. The crew consists of four permanent employees and a small summer work staff.

"They are so talented," Ellico said. "The fact that they were willing to take it on with all of the other regular projects they have going on is wonderful. They have taken on two huge projects for two summers in row. Its such a blessing to the community because we had used a contractor it would have been triple the price."