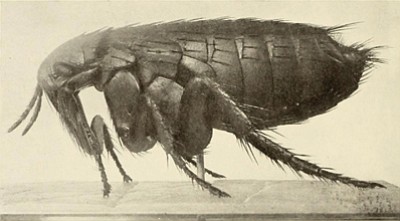 Spread of the plague has been attributed to flea bites. Photo/flickr commons

GRAND CANYON, Ariz. - Coconino County Public Health Services District (CCPHS) and the National Park Service (NPS), hope that by monitoring public areas for the presence of the plague and detecting it early, they can help prevent the potential spread of the plague to the public.

This month, the agencies will be starting monthly monitoring for the plague at various locations on the South Rim of Grand Canyon National Park.

The process of monitoring for plague involves trapping and anesthetizing squirrels, removing fleas found on the squirrels and testing fleas for the presence of plague. Monitoring will occur through September.

According to the park, the plague is a rare, but sometimes fatal, disease caused by the bacterium Yersinia pestis. It is primarily a disease of animals but can be transmitted to humans through the bites of rodent fleas or by direct contact with infected animals.

It is considered endemic in northern Arizona at elevations above 4500 feet (1372 m). An average of one to two human cases of plague are reported each year in Arizona. The last human case in Arizona occurred in 2008.

Grand Canyon visitors and residents should be aware that plague activity increases during summer months and appropriate precautions should be taken to minimize risk of exposure.

The park warns people living, working or visiting areas where plague is known to be, to take the following precautions to reduce their exposure:

· Do not touch or feed wildlife, including rodents.

· Control fleas on pets with flea collars or flea sprays.

· Use insect repellant when visiting or working in areas where plague might be active or rodents might be present.

· If your job requires you to handle sick or dead animals, wear appropriate personal protective equipment and consult with wildlife veterinarians, as needed.

· Domestic cats and dogs are susceptible to plague. Pet owners should take their ill pets to a veterinarian for evaluation.

According to the www.cdc.gov (Center for Disease Control and Prevention) there are three forms of the plague: bubonic, septicemic and pneumonic.

Symptoms of the bubonic plague may include fever, headache, chills, and weakness and one or more swollen, tender and painful lymph nodes.

Symptoms of the spticemic plague may include chills, extreme weakness, abdominal pain, shock and possibly bleeding into the skin and other organs. Skin and other tissues may turn black and die, especially on fingers, toes and the nose.

Symptoms of the pneumonic plague may include fever, headache, weakness and a rapidly developing pneumonia with shortness of breath, chest pain, cough and sometimes bloody or watery mucous.

Additionally, pneumonic plague may develop from inhaling infectious droplets or from untreated bubonic or septicemic plague after the bacteria spreads to the lungs, according to www.cdc.gov.

The bubonic and the spticemic plagues usually result from the bite of infected fleas or from handling infected animal.

Additional information about the plague and other zoonotic diseases can be found by visiting http://inside.nps.gov/publichealth/zed/zed.htm. and . " target="_blank"> http://www.cdc.gov/plague/ .