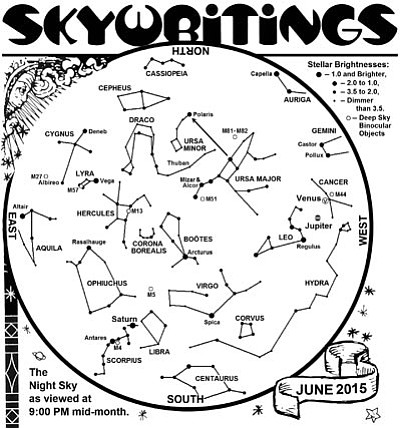 Why is the night sky dark? Scientifically it isn't obvious why the sky is dark. This oldest and simplest astronomical observation actually tells us something profound about the universe.

Astronomers agree generally that the universe is uniformly filled with stars and also infinite in size. Why doesn't the sky appear as bright as the sun's surface?

For example, let us imagine that we are in the middle of an enormous forest, and no matter in which direction we look, our line-of-sight is eventually obstructed by a tree. Even though the trees are well separated, we are still surrounded by a wall of green. Any gap between near trees is eventually filled by trees further away. By this same argument, one would expect to see a solid wall of star light in every direction, given an almost limitless number of stars distributed throughout the infinite vastness of space, i.e., your line-of-sight would intersect the surface of some star no matter in what direction you observe.

Hence, using this logical argument, with the sun being an average star, the night sky should appear as bright as the sun's surface.

Noted astronomers such as Johannes Kepler in 1610, Edmund Halley in 1720, J.P. Loys de Chéseaux in 1744, and H. Wilhelm Olbers in 1823, all pondered this problem now commonly referred to as "Olbers' paradox." Kepler suggested that the universe of stars extended only out to a finite distance. Once your line-of-sight passes that boundary, it encounters only empty space. But, as far as we can observe, we see stars. Olbers suggested that starlight is gradually absorbed while traveling through space, and this cuts off the light from any stars beyond a sufficiently great distance. So where does the argument go wrong?

Surprisingly, the first scientifically plausible proposal was given in 1848 by American author Edgar Allan Poe, who suggested that the universe is not old enough yet to fill the sky with light, and though the universe may be of infinite size, there hasn't been enough time since the universe began for starlight, traveling at the speed of light, to reach us. However, it was not until the mid-20th century, that an explanation of this phenomenon has found resolution. The fact that most everything in the universe is moving away from us is well documented by both visual spectroscopic, radio telescopic, and other astronomical data. The expansion of stars and galaxies away from one another has two effects on the light emitted from them. First, the emitted photons have further to travel to reach Earth. Thus their rate of arrival is much less than if the universe was not expanding. And second, the light waves are shifted by the immense expansion velocities into longer wavelengths which have lower energies due to the Doppler Effect (also known as Red Shift.) Together these effects reduce the intensities of stars, especially since further galaxies are receding from us at velocities approaching the speed of light. Scientists have calculated that for the sky to be bright we must be able to observe stars that are on average 1024 (1 followed by 24 zeros) light years away from us.

Since stellar lifetimes are relatively short in comparison, and the age of the universe is only 13.8 billion years old, there hasn't been enough time for the great majority of light photons to reach us.

Members of the Coconino Astronomical Society, in conjunction with the city of Williams, will host a Star Gazing Party from 7:30 to 9:30 p.m. on Friday, June 26 at Glassburn Park, in the natural area west of Rod's Steakhouse parking lot. Several large telescopes will be on hand to view the moon, planets and other celestial objects. Organizers recommend bringing a folding chair, or blanket, and your own binoculars.