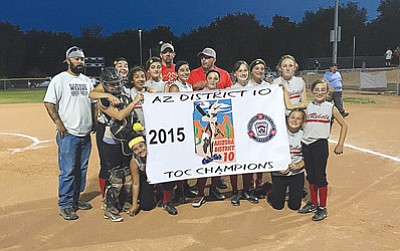 The Rebels played the Bagdad Coppers in the opening game. Led by power hitter Jazlyn Romero, the Rebels beat the Coppers 14-11. Jazyln had four at bats including three homeruns and a single. She pitched six innings and racked up eleven strikeouts keeping the Coppers off balance.

The team got off to a rocky start, but came back in the sixth inning to advance in the tournament.

"Our girls had some jitters playing away from home for the first time this season," said coach John Romero of the start. "We had some mistakes that continued to keep the Coppers within striking distance."

The Coppers came out swinging in the first with their first six players advancing to run the score up 4-0.

"The Coppers are a well-coached team, with a tough pitcher," Romero said. "They are gritty with a tough fan base."

The Rebels came back to hold the game close throughout the first and second innings, but couldn't pull ahead of the Coppers.

Finally, down one run in the top of the sixth, Cassidy Kearly came up with a big hit up the middle. That was followed by singles from Riley Hollis and Ashlyn Kennelly and a monster home run by Jazlyn, which put the Rebels in the lead for good.

"It all started with Cassidy's big hit, which gave the girls the momentum they needed to beat a good Bagdad team," Romero said.

After beating the Coppers, the Rebels faced the hometown Verde Valley team in the championship game.

"The girls were a little intimidated going up against Verde Valley," Romero said. "But after the first inning our girls realized that they could compete with them."

The team put up seven runs before giving up an out in the first inning. The momentum carried over from there with good overall defense and hitting.

Williams took the championship title with a 19-1 win.

"It was a game that the girls put all together with excellent hitting, pitching, base running and defense," Romero said. "The girls played their hearts out. I have coached most of these girls since they were nine years-old, and it has been amazing to see the girls grow into the players and team that they have become."