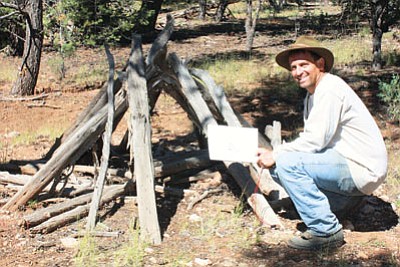 Weintraub, zone archaeologist for the Williams and Tusayan ranger districts, was named the 2015 "Professional Archaeologist of the Year" by the commission for his significant contributions to the protection and preservation of, and education about, Arizona's non-renewable archaeological resources.

"Neil's commitment to public archaeology and education goes way beyond what is required of a federal archaeologist," said Ann Howard, deputy state historic preservation officer who nominated Weintraub. "His dedication, commitment and enjoyment of sharing the stewardship message and ethic with the public makes him stand out."

His duties as an archaeologist with KNB for the last 25 years include surveying National Forest lands for cultural resources, identifying and documents sites that are discovered and ensuring those sites are monitored and protected.

With more than 10,000 archaeological sites recorded in the KNF, it is particularly rich in historical and cultural resources. These historic properties, which Weintraub has helped locate and manage over his quarter-century-long tenure, are related to a long history of human occupation and use of the KNF and dates back to around 12,000 years.

"Given our challenging multiple use mission, protecting and preserving these sites would be nearly impossible if it were not for the relationships and mutual trust that have been built with our partners over many years," Weintraub said. "We have countless examples in which permittees, seasonal employees, volunteers, local residents or others have told us about previously undiscovered sites. We investigate their discoveries by walking the landscape with them and having them help us with archaeological documentation. Most importantly we have all those extra eyes helping us protect and preserve these ancient, fragile places."

Howard included Weintraub's long-term work as a volunteer with the northern Arizona's Big Brothers, Big Sisters organization. Howard described how Weintraub always finds ways to get the youth involved in the program and Arizona's past.

"Neil has a never-ceasing enthusiasm for raising the awareness of the citizens of Arizona, especially the children," Howard said. "Making children sensitive to the fragility of our state's non-renewable heritage resources is absolutely critical to the future protection and preservation of Arizona's cultural resources."

Weintraub was presented the award in May at an awards luncheon in Flagstaff as part of the 2015 Arizona Historic Preservation Conference.