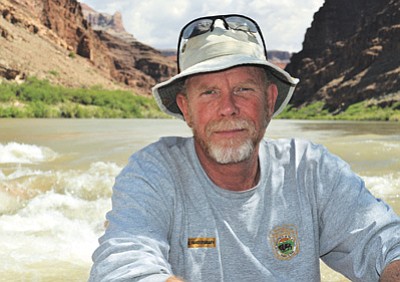 GRAND CANYON, Ariz. - For Bil Vandergraff, better known by his nickname, One L Bil, his 25 years at the Grand Canyon have been well spent and have given him a career doing what he loves.

Twenty-five years ago Vandergraff was not set on becoming a backcountry ranger. As a matter of fact, he was talked into it.

"Back in 1990 I met a backcountry ranger while (I was) hiking in the Grand Canyon and they convinced me to do some volunteering for the backcountry office," Vandergraff said. "That ultimately led into a career a couple of years later."

Before becoming a ranger, Vandergraff was an all-purpose handyman.

"I was one of those folks who did everything," he said. "I was a jack of all trades, so to speak."

His ability and willingness to do just about anything as well as his essential knowledge of safety and backcountry ingenuity, helped shape his career with the Park Service. By the time Vandergraff retires at the end of June, he will have volunteered and worked for over 25 years with Grand Canyon National Park.

In recognition of his dedication and commitment to the park service, Vandergraff will receive the National Park Service's (NPS) highest ranger honor - the Harry Yount award at a ceremony in Washington D.C. June 25.

The award, bestowed on a deserving park ranger is awarded annually and is given to those who served in the legacy of Harry Yount - the first known national park ranger who patrolled the wilds of Yellowstone during the 19th century,

For Vandergraff being nominated and selected as the 2014 recipient has been an honor.

"It's a great honor to be recognized by peers," Vandergraff said. "It's really amazing."

A recent press release by the NPS Director Jonathan B. Jarvis named Vandergraff the 2014 recipient of the award.

"With 25 years of experience in the Grand Canyon, chances are, no matter what it is, Bil has been there and seen it before," Jarvis said. "Park visitors are in good hands with this extremely dedicated and capable public servant on watch."

In his time with the NPS, Vandergraff has hiked 10,000 miles, spent 3,000 days helping visitors below the Canyon's rim and assisted with more than 2,000 search and rescue operations, according to the national park.

Said to have encyclopedic knowledge of the Grand Canyon, Vandergraff has been the ranger to go to for many years. His expertise and engaging personality have made him an asset to the park. He has also become a respected mentor and trainer for search and rescue operations around the country.

Over the years, Vandergraff combined his love of hiking and backpacking with his career. He has spent the majority of that time at Grand Canyon National Park.

"It's the only park I've worked at, for sure," he said. "I have done details for at least a dozen other parks but it's always been the Grand Canyon."

As a backcountry ranger Vandergraff's patrols have taken him the depth and length of the Canyon - below and above the rim, zigzagging in and out of a network of trails and to the outer boundaries of the park.

"The place that I like to be is on the boundary," Vandergraff said. "That's where you can catch poachers and people who are just trying to exploit the resources that we are pretty much committed to protecting."

Patrolling the boundaries of the park, and being able to protect it from threats, has been one of the most fulfilling and satisfying aspect of Vandergraff's work as a backcountry ranger.

"I think it's in the tradition of Harry Yount, it's being out patrolling in the park and being on the boundaries - working to keep the poachers out - poachers and looters who are still trying to exploit what we are committed to protecting," he said. "Some of the cases I have made over the years are very, very satisfying."

In addition to backcountry patrolling, Vandergraff has spent a significant portion of his career helping in search and rescue operations. For several years he was an integral part of the park's aviation program, as both a helicopter manager and short-haul spotter on more than 500 flights.

According to the park, Vandergraff worked with the helitac crews to integrate search and rescue coordination into risk management decisions to make all-hazard operations safer and more efficient.

"A helicopter is a very pragmatic if not efficient way to go to places in the backcountry, as needed," Vandergraff said. "Any successful short-haul operation is a combination of the person on the end of the rope as well as the helicopter spotter and the pilot. The three of them are essentially a team that when they work together really well, the outcome can be successful."

Vandergraff also co-developed a Search Management Action Plan for the National Park Service and has gone as far as Bolivia to help in search and rescue missions.

"Bolivia was essentially a co-operative project with the Peace Corps," Vandergraff said about the mission to Bolivia. "One of their volunteers had gone missing several years prior and that was a cold case they were trying to wrap up by applying some consistent and systematic search management principals."

As far reaching as his missions have taken him, of the 2,000 operations Vandergraff has helped with, most have been at the Grand Canyon.

"There have been a lot of them," he said. "Primarily at Grand Canyon and the diversity is pretty broad - from helping somebody out a little bit to maybe something a lot more complex."

Vandergraff attributes his knowledge and qualifications in search and rescue missions to the skills and experiences he acquired as a backcountry ranger.

"I think a backcountry ranger's knowledge makes it a little easier for them to assist people that need some help," he said. "That geographical knowledge you have of an area where somebody has gotten themselves into trouble helps."

For Vandergraff, there are many reasons why people end up needing help while at the Canyon. He believes underestimating the Canyon and its untamed nature is a contributing attribute for many missions he has worked on.

"It's not a result of poor judgment - the Grand Canyon is an inherently dangerous place and from time to time bad things happen," he said. "For example, (you could be) just walking down the trail and a rock falls on you. I think the vast majority of people we've assisted over the years have been the result of poor decision making on their part and underestimating the Grand Canyon or the challenge of hiking in the Grand Canyon."

Upon retirement, Vandergraff said he plans to split his time between Washington state and Arizona.

"This is wrapping it up or closing it out," he said. "I plan on doing everything I've always done, with the exception of no work."