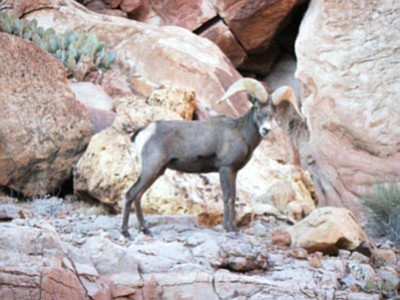 Wildlife encountered during one of Tom Martin’s hikes in the Grand Canyon. Photo/Tom Martin

Many are the lucky people who have hiked the Grand Canyon Rim to Rim, hiked the main Canyon trails, or even rafted through the entire Grand Canyon on the Colorado River from Lee's Ferry to Pearce Ferry.

The journey has been completed on both sides of the Colorado River. Some people have hiked entirely on the south side of the river, while others have hiked on the north side. Still others have hiked through Grand Canyon by a combination of north and south side hiking. No matter which side is used, the distance is 277 river miles from start to finish.

There is a reason why only two dozen people have done this. You cannot walk along the river all the way.

There are many dozens of miles where cliffs tumble directly into the river, those attempting the hike must manage to find a way along cliff tops, often a good thousand or more feet above the river. Large side-canyons must be crossed, often requiring many miles of side canyon hiking just to make a mile of forward progress. Foot mileage is at the very minimum a distance of over 600 miles. For at least 75 percent of the journey on the south side, there is no trail. On the north side, there is no trail for over 90 percent of the journey.

The land itself dictates the route, and much planning is involved to manage water and food caches. The trek includes many miles walking in country far away from anyone else, along steep slopes and through the occasional boulder field.

Besides trying to sort out which side of the Canyon to walk through, people attempting to hike through Grand Canyon will need to figure out if they are going to attempt to thru-hike the journey all in one trip, or do the journey in segments. Both ways are very difficult.

The hike through the entire length of Grand Canyon was first completed in 1976 by Kenton Grua. Walking the south side in one continuous journey, Grua took 39 days to complete the first thru-hike trek. Others have since done the walk in one fell swoop, like Grua. At the time of this writing, the quickest thru-hike time is a 24 day solo through hike on the north side, done in 2013 by Grand Canyon National Park Ranger Todd Seliga. Ranger Seliga had already completed a 39 day through hike in 2012, also on the north side.

In November 2013, Andrew Holycross, a professor at Arizona State University, finished a continuous walk of the north side in 65 consecutive days, right through the federal government closure of Grand Canyon National Park. Andrew had already completed his south side hike, joining Bob Packard and Robert Benson as the only people who have hiked both sides of the Grand Canyon.

In December 2013, Matthias Kawski, also a professor at Arizona State University, finished a hike through Grand Canyon on the south side. After a few years of working at it, and a few weeks before Kawski, Flagstaff botanist Glenn Rink finished his walk through. Like Kawski, Rink hiked the Canyon in sections.

By the end of 2013, the number of hikers that had walked through Grand Canyon from start to finish had risen to 21.

By the end of 2013, only two women had completed a hike through the Canyon - Sara Steck and Bec Keil. That changed when in November 2014, Grand Canyon photographer Kristen Caldon completed her segmental hike.

Jacek Macias completed his segmental journey at Pearce Ferry on November 3, just ahead of Caldon. By the end of 2014, the number of people who had hiked all the way through Grand Canyon had risen to 23.

The longest hike through, completed by Bob Packard took 32 years to hike the south side in segments.

I just joined Packard in this "smelling the roses" slow speed journey.

Back in 1973, with my Pyrenean Mountain dog, I hiked the eight miles from Pearce Ferry to Evans Heaven that summer. I was hooked.

Hiking in segments since then, I tied up a through line involving mostly the north side of the river in May of 2015 - it's been a 42-year segmental journey in paradise.

The start-to-finish hike is like completing the outline of an inspiring jigsaw puzzle. You finally know the immense outline of the place, and can start filling in the remaining huge gaps. And no one has yet done that.

Congratulations to all 24 Grand Canyon through hikers. To those out there working on the line, including those that are very close to finishing, such as the father-son team of Dr. Tom Myers and his son Weston, and college students Connor Phillips and "T" McCullough, walk on.