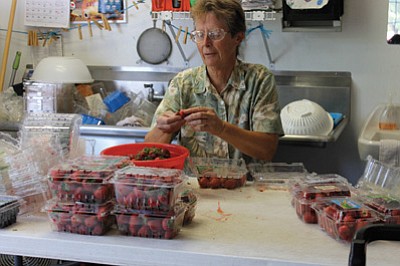 WILLIAMS, Ariz. - The shelves are looking a little bare at the Williams Food Bank.

The food bank is owned and operated by the Foundation for Senior Living and relies completely on food and monetary donations. Each week 50 to 60 low-income families line up to receive a cartload of milk, bread, canned foods, fresh produce and basic necessities. Each family receives about 30 items.

Mikkelsen said the decrease in the amount of food donations from the Phoenix valley and northern Arizona has created a crisis at the Williams Food Bank. The closing of the Walgreens Distribution Center and the shortage at the Flagstaff Family Food Center has had a big impact on the Food Bank.

"Walgreens was a big avenue of mostly nonfood stuff but it really rounded out the store," Mikkelsen said.

Mikkelsen said whether the economy is good or bad, the need in Williams is still there.

"There are so many people struggling who live below the poverty line," Mikkelsen said. "Many are on fixed incomes and the demand never changes."

Mikkelsen is encouraging people to look in their own homes for donations. He said the food bank is looking for donations that a family can create a meal with, not just snack foods to temporarily fill the hunger. He said that soup, meat, rice, and pasta are ideal items that can be used for dinners.

"If everyone just brought in 10 items to the Food Bank," Mikkelsen said. "We would create a huge pile of food."

Channel 12 News ran a story July 21 about the Williams Food Bank crisis, which spurred a small rush of donations. The donations were enough to cover the 60 families who appeared on July 24.

"One of our latest donations was a huge load of Doritos chips," said Kali Kaliche, a volunteer at the Food Bank. "We appreciate the donation but we really have a need for staples such as rice, canned goods and pasta. Something people can make dinner with."

The local Boy Scouts will put on a food drive soon in an effort to fill the center.

The Scouts are asking the community to bring canned and non-perishable foods to the Food Bank, Monday-Friday from 8 a.m. to 5 p.m. Monetary donations can be accepted at 200 S. Ninth St. in Williams or fsl.org.